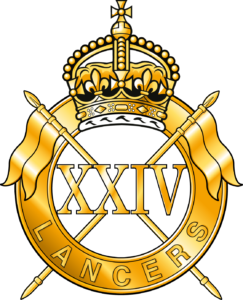 Alan Divers 24L and 13/18H (April 1942 – November 1946). The following is an extract from Alan Diver’s memoires and are the property of his widow. The extract covers the D-Day landing and the day his tank was knocked out.
Alan wa 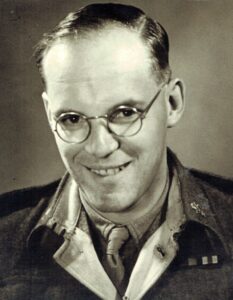 s called up for National Service on 23 April 1943, where he trained as a driver/mechanic at the Royal Tank Regiment’s, 4th Training Regiment at Farnborough, Hampshire. On completion of his training, he joined B Squadron 24L at Thetford Heath, eventually posted to 5th Troop which was equipped with Crusader tanks. In June 1943, the regiment received its first Sherman tanks, and as the youngest man in the troop was sent to the troop leader’s crew, Lieutenant Frank Fuller, as the front gunner located in the hull next to the driver.
The tradition in the 24L was that all the vehicles were given names starting with the letter of their squadron, 5th Troop’s tanks were Buccaneer, Bandit and Brigand, with the troop leaders tank being Buccaneer (T.152350

). Buccaneer would be the tank Alan would serve in on D-Day and the short time he was with the 24L. In addition to Fuller, his driver was George Haywood, loader/radio operator was Bill Etteridge, and the gunner was Doug ‘Peggy’ Cochrane. Shortly before their departure, the troop was allocated its 75pdr Sherman ‘Firefly’ commanded by Corporal Robinson. 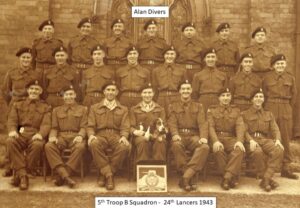 The 24L moved to Southampton and were loaded onto the Landing Ships Tank (LST), which were provided by, and crewed by Americans. B squadron managed to get its whole squadron of 19 tanks onto their LST and remained in the Solent ‘for the next 4-5 days before sailing.’ However, there was no complaints as the American’s were well rationed, and apart from no tea or potatoes which had been substituted by coffee and rice ‘they were quite comfortable.’ The operation order for the day designated ‘Jig Green’ on GOLD beach as the landing point for the 24L on D+1.
After a delayed start to the invasion, due to poor weather, the 24L found themselves off the coast of Normandy, minus their Rhino landing raft which had come adrift during the night. The 24L LST was in the middle of the convoy, and therefore they were unable to go back for their Rhino, but it was caught by the last ship in the line. On arrival off GOLD Beach, their Rhino was not returned to them, until the other LST had used it to unload their own tanks which resulted in B Squadron landing at ‘teatime instead of noon.’ In the confusion of the crossing, not only had B Squadron lost its Rhino, but had moved forward in the landing sequence and ‘90% of B Squadron and parts of HQ landed on the second tide on D-Day.’ 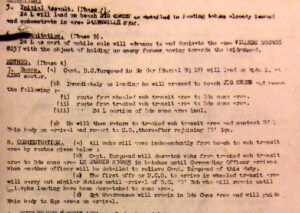 Eventually when their Rhino was returned, due to the sea swell it took a considerable time to load the tanks, but remarkably they managed to get the whole squadron onto a single raft. The somewhat ‘unwieldly’ raft made of ‘6ft biscuit tins, welded together and driven by two enormous Chrysler truck engines, and was steered by speeding up or slowing down each engine.  The general waterboard was about 18” above the water, but due to the overloading and the swell the waves continuously ‘swept right across it.’
Once the Rhino arrived off the beach it touched down in about three feet of water, and they were soon off the beach. In the unloading process 5th Troops ‘Firefly’ broke its propshaft coming down the ramp of the Rhino onto the beach. It was eventually drowned by the incoming tide and did not re-join the troop until 25 June. Having arrived too late ‘to do anything useful,’ the squadron leaguered in a field just inland which was full of dead cows, killed in the Navy’s pre-landing bombardment. The first day, being as the regiment was still incomplete B Squadron spent the day conducting reconnaissance patrols and rounding up German prisoners. 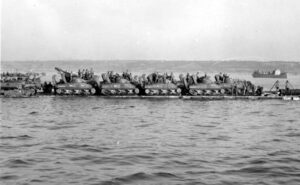 After a period of 3-4 days’ rest , on 25 June, the 24L took part in Operation EPSOM. Initially they supported the set-piece attack of 49th Division and the 4th Battalion Lincolnshire Regiment at Fontenay-le-Pesnel. It was here, when crossing a field Buccaneer was engaged at very close range by a Panzerfaust, the projectile travelled ‘quite slowly’ and as they saw it coming it bounced twice off the ground and passed the tank on the offside, ‘I could hardly believe it missed us, it was incredibly close.’ Eventually they reached the edge of Tessel Wood, where they took up a position on the north-west corner, facing south. 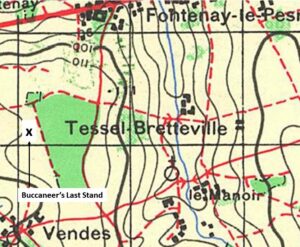 From their location they had seen a Panther, the troop Firefly had been called up to engage, but had been unsuccessful, and there was no point engaging the Panther with their own 75mm gun. Meanwhile, they waited in the area of the wood, being engaged several times, but after some time Alan dozed-off, and was woken by the tank suddenly jumping. His first thought was why they had started to engage, when Bill Etteridge shouted, “we’ve been hit.” Alan was relieved it had happened, as he had expected to be knocked out sooner or later. His thoughts did not consider if he or any of his crew might have been hurt, Alan was just relieved he was alive. The Panther round had penetrated the Sherman’s front armour, somewhere low-down exploding behind the front seats on the turret floor.
Immediately the tank caught fire and Alan noticed his hands had started to burn, ‘the skin had split and peeled off, eventually the fingers began to turn like claws and the fingernails turned brown.’ After Alan had gotten out of the tank, he found the rest of the crew next to the tank, all wounded. Alan was the last out of the tank, because mistakenly the commander thought he was dead. After being administered with morphine, Alan made his way to the rear, and on finding the Lincolns was directed to their Casualty Clearing Post (CCP).
Alan’s war with the 24L had lasted only 19 days, the following day he was evacuated back to England. He was treated for two weeks, at the Basingstoke Burn’s Unit followed by another three and a half weeks at the hospital at Chester-Le-Street near Newcastle. The extent of his wounds had been more serious than his initial assessment, Alan had been wounded twice in his left thigh, a wound to the back of his head and severe burns to both his hands, face, and ears. After a period of convalescence and leave, in January 1945 he re-joined the BEF serving with the 13/18H, since in his absence the 24L had been disbanded in July 1944. Alan was demobilised in November 1946.
Alan wrote his memoires in March 1996 and recorded an interview with HHQ on 27 June 2016. Sadly, Alan passed away on 5 January 2021 aged 97 and is survived by his widow Rosemary.
PAW