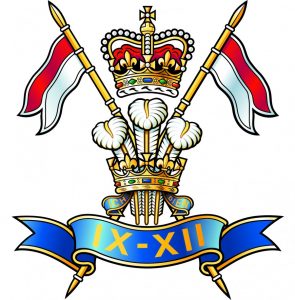 Shortly after its formation the 9th/12th Royal Lancers moved to Northern Ireland where both its antecedent regiments had started their histories almost two hundred and fifty years before. In September 1962, the Regiment sailed from Southampton for Aden, equipped as an armoured car regiment and engaged in security duties in the Aden Protectorate and the Trucial Oman States for a year. On returning from the Middle East the Regiment moved to Osnabruck in Germany where it converted from an armoured car regiment to an armoured regiment. On the 15 July 1965.

The Regiment became the Royal Armoured Corps Training Regiment at Catterick in January 1969, with A Squadron detached to provide tank support for the Berlin Infantry Brigade. On 9 May 1970, the Regiment was once again honoured with a visit by the Colonel-in-Chief. In January 1971 the Regiment reorganised as an armoured regiment in 20th Armoured Brigade based in Detmold. The Regiment’s close ties with the City of Derby were cemented by the award of the Freedom of the City on 10 May 1972.

With troubles in Ireland once again, C Squadron converted to armoured cars in the autumn of 1972 for a four month emergency tour in Northern Ireland, where it was based at Gosford Castle, County Armagh. B Squadron followed in May 1973, and in January 1975 the whole Regiment went to Gough Barracks, in the City of Armagh, for a four month tour.

After a short spell back in Detmold, the Regiment moved to Omagh, Northern Ireland for an eighteen month accompanied tour of duty in Counties Tyrone and Fermanagh. By November 1977 it was back in Tidworth, where the new Regiment formed in 1960, with C Squadron detached to the Sovereign Base Area in Cyprus. C Squadron was joined by A Squadron, serving in the United Nations force, for six months in 1978. While the Regiment was in Tidworth, troops served in the infantry role for six months with the 1st Battalion, the Worcestershire and Sherwood Foresters in Belize and the 3rd Battalion the Light Infantry in Cyprus.

The 5th May 1979 provided the first opportunity in nineteen years to present the Regiment with its new 9/12L Guidon. The ceremony was performed by the Colonel-in-Chief. The Old Regimental Guidons of both parent regiments were laid up in St Michael’s Garrison Church, Tidworth. Shortly afterwards the Regiment moved to Munster as an Armoured Reconnaissance regiment, equipped with a mixture of wheeled and tracked reconnaissance vehicles, to join the 5th Field Force.

After an 18 month stay at Munster the Regiment moved to Bergen-Hohne in November 1980, to take up duties as the 1st Armoured Division Armoured Reconnaissance Regiment, fully equipped with the new tracked Combat Vehicle Reconnaissance family. In June 1982, C Squadron went to Northern Ireland to provide the Maze Prison Guard Force for three months, and in July the Colonel in Chief visited the remainder of the Regiment in Hohne.

In February 1984, the Regiment moved to Wolfenbuttel, reorganising into four sabre squadrons, handing its Scorpions over to the armoured regiments and taking back the Striker, guided missile system from the Royal Artillery. The basic reconnaissance vehicle then became the Scimitar.

In both 1985 and 1986 the Regiment competed in the Boeselager International Armoured Reconnaissance Competition hosted by the German Army. In June 1986 at Sontra the Regiment won the competition. Not only did the team win the Auslander competition (for all the non-German teams) but were placed first overall, the first and only time this has ever happened – a truly outstanding achievement. For his success in leading the team Sgt David Williams was awarded the British Empire Medal.

In January 1987 the Regiment moved to Wimbish in Essex, with three sabre squadrons and one Guided Weapons squadron. Its role then was as the Medium Reconnaissance Regiment for 3rd Armoured Division. On Friday 10 June 1988 the Regiment was honoured with a visit by the Colonel in Chief HM Queen Elizabeth The Queen Mother. On Tuesday 21 June 1988 the Regiment re-affirmed its close ties with the City of Derby and exercised its right to March through the City.

During the tour in Wimbish three squadrons were sent on separate six-month tours to Cyprus as part of the United Nations peacekeeping force, a popular posting with the soldiers. A number of B Squadron soldiers also served in Belize as the Armoured Recce Troop for six months. D Squadron and a troop from B (Guided Weapon) Squadron and all regimental assault troop trained soldiers also deployed to Saudi Arabia in 1990 and 1991 in support of Operation Granby, the operation to liberate Kuwait from Iraq. This deployment delayed the move back to Germany to over with the 16th/5th Queens Royal Lancers who were also deployed in Saudi Arabia until August 1991. The Regiment returned to Herford where the 12th had been stationed in the 1950’s prior to amalgamation.

After being in Herford for only six months C Squadron deployed to HMP Maze, Northern Ireland in early 1992. The deployment took it into the summer months with well-earned post tour leave cut short for a number of soldiers with a call back to Germany in response to a need for a squadron to deploy with the 1st Battalion the Cheshire Regiment Battlegroup to Bosnia. B Squadron complete deployed in October 1992 after carrying out an intense training package at Sennelager. ‘B’ Squadron provided reconnaissance support to the Cheshires during the bleak winter months of 1992. Nine awards were given to soldiers from the Regiment for the deployment on Operation Grapple 1.

B Squadron returned to Herford in April 1993. As it returned it found the barracks transformed into a mock up of Northern Ireland and witnessed A and D Squadrons preparing to deploy as the roulemont battalion in Girdwood Barracks Belfast taking under command Bty Royal Artillery. No less than 17 operational awards were given including the Military Cross for Cpl Andrew Dynes, one of the first to be awarded to a non commissioned soldier. The Regiment was deployed at a time of intense violence as terrorists and state moved towards the first ceasefire a few months after the tour. Seven soldiers were wounded in action.

On the Regiment’s return from Belfast it moved back to the UK and took responsibility as the RAC Centre Regiment based at Bovington, Lulworth and Warminster. A Squadron took on the vehicle fleet in Bovington and B Squadron were deployed mostly in the field as a tank squadron using Chieftain and later Challenger 1 and a recce squadron using Scorpion in Warminster. C Squadron controlled the training element of support in Lulworth and D Squadron looked after RAC recruits going through trade training.

During this period in southern England the Regiment also deployed a large number of personnel to Bosnia including RHQ to form a UN unit named BRITCAVBAT, This was based at Zepce. This deployment was reformed as an Operation Grapple 6. On the sporting front the Regiment dominated the Cavalry Cup football with four visits to the final and three wins (winners in 1995, 1996 1999 and runners up in 1997) and the Regimental Cross Country team achieving a hat-trick of wins in 1995, 1996 and 1997. During that decade no other team came close to achieving a run as successful as this.

In 1996 the first elements of the Regiment moved to a new post in Norfolk, the former RAF station at Swanton Morley. By the end of 1997 the whole Regiment was in place and swiftly afterwards deployed to Bosnia with B and D Squadrons and A Squadron the Royal Dragoon Guards under command.

In the summer of 2000 the Regiment was honoured to host the Colonel in Chief for the second time in as many years. Her Majesty visited Swanton Morley just a few days before her one hundredth birthday and presented the Regiment with a new Guidon. As she departed at the end of a wonderful day the Regiment departed Norfolk for Haig Barracks, Hohne in Germany where it is based today.

Once in Hohne, C Squadron deployed on a tour of Kosovo. The tour would be marked with a number of incidents and the death of Tpr Adam Slater killed in action when his vehicle hit a mine. On C Squadron’s return both A and B Squadron deployed on Exercise Saif Sareaa (Swift Sword) in Oman where rumours of further deployments added excitement to the exercise because of the now infamous 9/11 terrorist attacks in America.

Between 2002 and 2004 the Regiment would deploy to various operational areas. Firstly B Squadron would again deploy to Bosnia throughout the summer months and into the early autumn. C Squadron had already been warned off to deploy on Operation TELIC 3 as part of the 1st Battalion Light Infantry Battlegroup with 20 Armoured Brigade. With less than 12 weeks to go however A Squadron was re-tasked to deploy on Operation TELIC 3 also. With a large number of RHQ also deploying the regimental rear party numbered a mere 60 men until the return of B Squadron from the Balkans. C Squadron was initially deployed to Maysan Province north of Basra, whilst A Squadron were part of the 26th Regiment Royal Artillery Battlegroup based just south of Az Zubayr and responsible for security in a large area stretching down from Safwan and Umm Qasr. C Squadron later moved to the Queens Royal Hussar battle group stationed in Basra which involved working with the border police forces both in the north and Iraq’s third city.

In early 2005 the Regiment was again put on high alert to deploy to Iraq, this time with 7 Armoured Brigade on Operation TELIC 7. The Regiment would form its own Battlegroup with support from C Squadron the Royal Scots Dragoon Guards and the Queens Royal Lancers. In this year the Regiment ceased its dedicated role as the divisional reconnaissance regiment and became full part of 7 Armoured Brigade.

Operation TELIC 7 was the first full regimental deployment for many years. The Regiment returned from Iraq in April 2006. A year of courses including converting to the BOWMAN radio system, adventure training and time with families allowed all serving some respite after a busy year. Highlights of the period included a cricket tour to Sri Lanka and a variety of other adventurous activities.

This training was a precursor to the deployment to Iraq on Operation TELIC 12; for many 9th/12th Lancers the third tour of the theatre in 5 years. A Squadron were increased significantly in numbers to go to the 1RRF Strike Battlegroup in Umm Qasr. The Regiment also provided half of the specially trained Divisional Surveillance Company and Armageddon Platoon and a small C squadron became a riverine unit responsible for fighting indirect fire teams using the waterways north of the main UK base at Basra Airport. The rest of the Regiment deployed Military Transition Teams to the Iraqi Army in Basra and Az Zubayr, living, working and fighting alongside Iraqi Brigades as they secured Basra from the militia threat.