This article describes some of the contributions made by the six historic antecedent lancer regiments during the Great War, in particular in relation to Mons, the emblazoned Battle Honour on The Royal Lancers’ Guidon that gives its name to The Royal Lancers’ annual celebration weekend.
The Mons battle honour relates to the Advance to Mons, the Battle of Mons, the Retreat from Mons, and the Return to Mons. It features on the Guidons of 9L, 12L, 5L and 16L but as we will see, many lancers originating in 17L and 21L would also have been painfully familiar with the city.
The article aims to not only look at the regiments, but also at the wider story which involved key appointments held by lancers in the British Expeditionary Force (BEF) at Mons and the pre-war relationship between the regiments that established a system of mutual support and dependency, which in turn helped foster the ‘cavalry spirit,’ amongst lancers.
All cavalry regiments were formally paired (affiliated) in 1897 with the disestablishment of the cavalry depot at Canterbury.
These individual pairings were designed to replicate the infantry principle, with one battalion being at home and the other being posted abroad to protect the Empire.
Each home-based lancer regiment would train and process recruits out as the ‘draft’ each September and would process the invalids and time-expired soldiers who would be sent home each May so that they could be administered out of the Army.
The priority for manning at that time was the Army of the Empire, with home units always understrength and manned by soldiers too young (under 21) to serve overseas.
In August 1914, 5L, 9L, 12L and 16L were all in the UK, and 17L and 21L were in India.
An additional measure to sustain lancer regiments during wartime was the commitment of three (out of seventeen in total) Reserve Regiments of Cavalry (RRC).
Naturally, these three RRC regiments were typically commanded by lancers: 6 RRC under Lieutenant Colonel Farnell-Colvin 9L in Dublin was to support 5L and 12L. 7 RRC at Tidworth trained soldiers for 9L and 21L, while 8 RRC, also at the Curragh and initially commanded by Colonel Portal DSO, 17L, trained men for 16L and 17L. When war was declared in August 1914, the four UK based lancer regiments needed to be brought up to strength at speed so that they could deploy on a war footing. 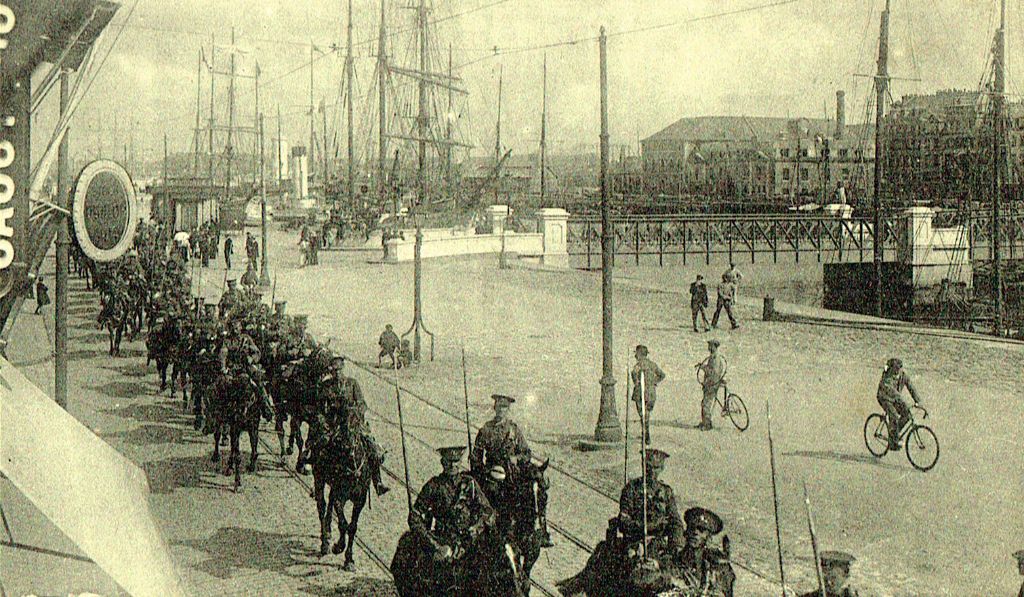 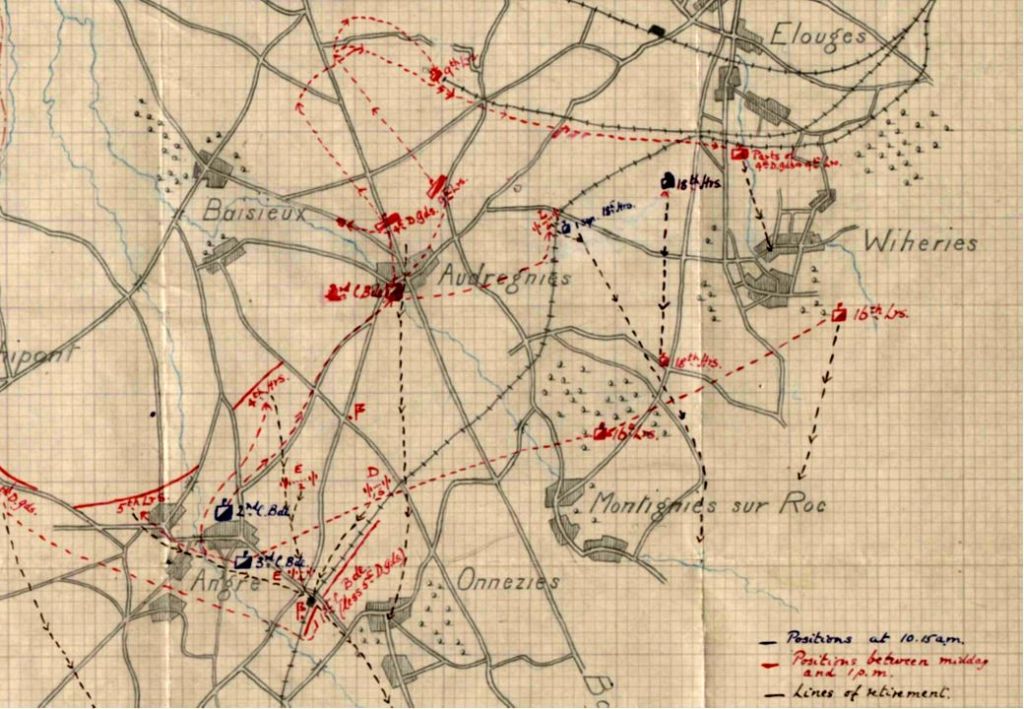 During the morning, Brigadier Gough’s 3 Cavalry Brigade came into dismounted action at Angre, just to the west of 9L and, together with 2 Cavalry Brigade, these two forward brigades covered the retreat of the 5th Infantry Division. On the following day, 12L who were covering the withdrawal of I Corps, saw action for the first time and C Squadron lost the majority of Lieutenant Dan Moore’s 1 Troop when 11 men were either killed or captured on the 25 August near Bavai.
On 28 August, 12L conducted a cavalry charge at Moÿ de l’Aisne against two regiments of Garde Dragoner as part of a brigade engagement.  This, for the most part, was a text book example of peace-time training being put into practice. From the beginning of the war, lancers had consistently demonstrated the effectiveness of pre-war cavalry training, showing by their flexibility and effectiveness that a blend of infantry and mounted skills made them uniquely competent in both the mounted and dismounted roles.
On 31 August, as 3 Cavalry Brigade continued to cover the retreat of I Corps,  5L retired through Fontenoy and crossed the river Aisne by the bridge at Le Pont. Lieutenant T De Burgh was left to watch the crossing with one troop of C Squadron together with Lieutenants E Robinson and Rice with two troops of D Squadron. The two D Squadron troops were positioned on the north side of the river as flank guards, to stop the Germans sneaking through and perhaps getting behind them.  They had orders to cross the river in the rear of the regiment. When crossing the bridge, they came under very heavy fire, but got across with the loss of five horses. Lance Corporal John Haley wrote:
Two troops of D Squadron were cut off from the regiment, about 60 men. As our advance point went through it was fired at…all the while the Germans were firing at us. We mounted up the best we could and set off for the bridge, which was barricaded with two big carts. We charged it and got through with our men, it was with good luck, no one was killed, only one man hurt through his horse being shot. When we got over the bridge we dismounted and cleared them out.[11]
Lance Corporal Joseph Smith, the soldier who was unseated during the gallop for the bridges, wrote:
It was awful, I lost horse and all arms, so made a run for it. Blinded with dust, stumbled till I fell down into a deep ditch, and there lay in about six inches of mud and water. In a few minutes four more of my mates fell in the same ditch, and as they had also lost their arms, we laid there, without means of defence, save one lance and my jack knife and my other pocket-knife…and our good British fists. There are 13 of us left now in my troop of 38.[12] 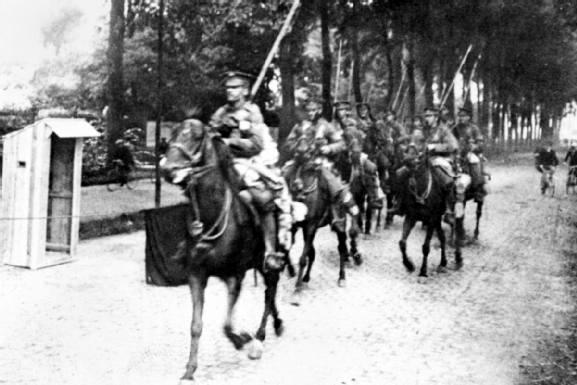 On 7 September, just over two weeks after their charge at Audregnies, 9L would charge again at Le Moncel near Fretoy.
Coincidently, it would be against one the Garde Dragoner regiments that 12L had engaged at Moÿ de l’Aisne the week before.
This, on the last day of the Retreat, would be the last lance against lance charge of the British Army, a supremely aggressive action that marked the first day of the BEF’s resumption of its advance north.
During the charge, Trumpeter ‘Paddy’ Byrne of 21L who charged with the 9L lost ‘one or two of his fingers in an encounter with a German Dragoon.‘[13]
The exploits of the two regiments that charged did not go unnoticed: both the commanding officers were to be promoted to command their own brigades by summer of the next year, while Lieutenant Colonel David Campbell, 9L would finish the war as GOC 21st Division.
Promotion is fast in war time.
During these mounted actions, Private Harry Knight of Northampton, who had enlisted in 5L and transferred to 12L, was killed with A Squadron at Moÿ de l’Aisne and Corporal Denslow, who had served with 21L, was killed at Audregnies with 9L.
These are just two of many, many examples of men who had served in one lancer regiment before being killed while serving with another – truly  “all of one company”.
During the early period of the war, soldiers of 21L wrote to their friends back in India telling them how the war was going and what was happening amongst the casualties.  Even though they were badged to 9L, the 21L men were still fiercely loyal to their regiment and did not want to be subsumed into 9L:
We all wear our own badges and numerals, although we were issued with the 9L, but all the French and Belgium lasses possess them now and I am a ‘barefaced’ lancer.’ So do send me cap badge[14] and a set of numerals, I do not want to wear the 9th, and want to let some of the other regiments know that there are some 21L having a go.[15]
Lancer regiments have always been family regiments, and amongst the lancers going to war were brothers from the same families serving in the different regiments.
Captain Gerald Reynolds of 21L, who was on leave from India, served with 9L, and it was his younger brother Captain Guy Reynolds, Adjutant 9L, to whom he reported on mobilisation. Their older brother, Captain Alan Reynolds, also went to war serving with 12L.
During the early stages of the war at Mons, Captain Francis Grenfell had gone to war with his twin brother Riversdale, who had acted as a ‘galloper’ for the commanding officer. Their older brother, Lieutenant Robert, 12L was attached to 21L and had been killed with them at Omdurman in 1898.
The current Colonel of the Regiment is third-generation 12L.  His grandfather was Regimental Signals Officer with 12L when they went to war in 1914.
When the war was about to end, on 11 November 1918, 5L’s commanding officer was sent for by the brigade commander of 7 Infantry Brigade and told that Mons had been taken by the leading battalion.
He was asked to send a squadron quickly through Mons and seize and hold the high ground about St. Denis which commanded Mons to the north-east.
A Squadron under Lieutenant Scott-Brown was ordered to saddle up at once and carry out this mission
The squadron moved out at 0745 and had to make a long detour owing to the bridges having been blown up over the canal and craters in the roads.
Going through Mons, the cheering crowds were so great that they were hardly able to make headway.
At St. Denis, the mayor reminded Lieutenant Scott-Brown that the first Cavalry skirmish of the war in August 1914 had taken place nearby.
In the meantime, orders were received that hostilities would cease at 1100 that morning, and this order was sent off to A Squadron as soon as their location could be found.
The advance guard of the brigade was to make an official entry into Mons at 1030 and 5L at once turned out an escort of 34 other ranks with lance pennons and one gun from the Royal Horse Artillery which had been in the operation round Mons in August 1914.
General Currie, GOC of the Canadian Corps spoke to Second Lieutenant Allison MC, 5L, the escort commander, on his entry into Mons that afternoon and invited him to stand on the steps of the Hotel de Ville with him, introducing him at the same time to the mayor.
General Currie directed that the lancer escort should march off parade first, saying that, as it was due to the ‘contemptible little British Army’ that they were at Mons that day, and as the escort was the representative there of the British Army that had fought at Mons in 1914, the place of honour should be taken by them.
5L therefore had the distinction of being the last to leave Mons in 1914, and the first to return in 1918. 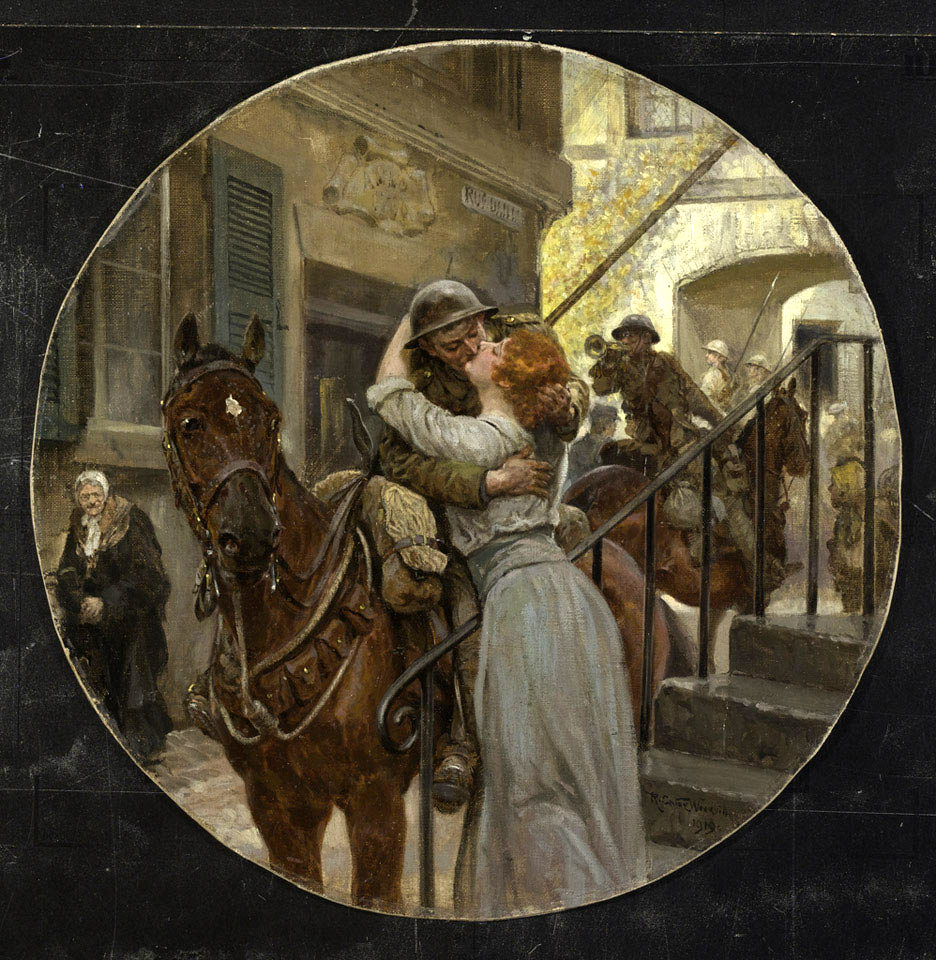 For 9L, they too returned nearly to the place where the war had begun for them four years earlier when, on 11 November they were in action as the advance-guard to the cavalry brigade in pursuit of the retreating Germans, neatly repaying with interest the painful retreat they had protected and taken part in at the start of the war. 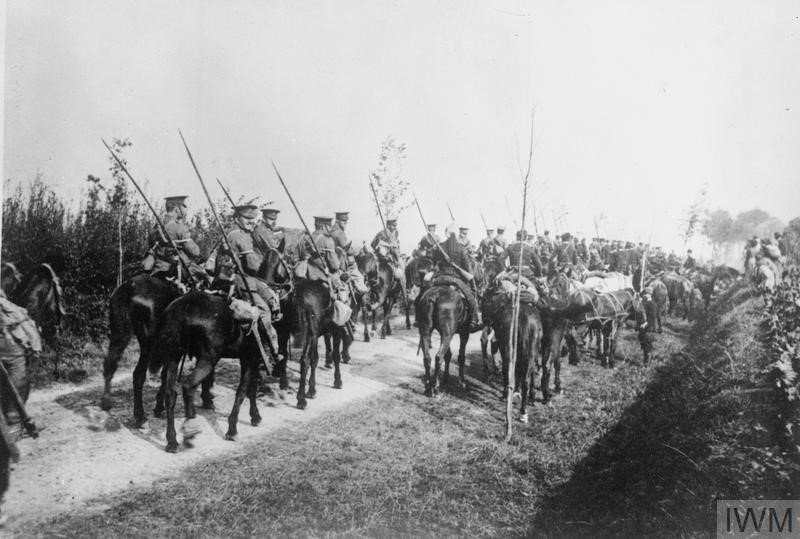 Lancers near Mons in August 1914

They arrived at Beloeil, just 10 miles north-west of Mons and just an hour’s ride from Thulin where B Squadron had first engaged the Germans on 23 August 1914, when the war came quietly to an end[16]
By the end of the war, six lancer regiments had fought on the North West Frontier and Europe and had the distinction of winning three Victoria Crosses; Captain Francis Grenfell (9L), Private ’Billy’ Clare (5L) and Private Charles Hull (21L).
The combined lancer losses during the war was 1046 officers and men. We will remember them.
PAW