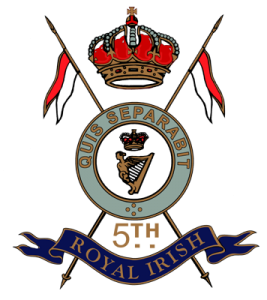 The 5th was first raised in 1689 and was amalgamated with the 16th in 1922 to form the 16th/5th Lancers. In the Great War the 5th was the last cavalry regiment to withdraw from Mons, and the first to re-enter Mons in the 1918 advance.

Raising of the regiment 1689

In 1689 The Royal Dragoons of Ireland were raised in Enniskillen by the Governor. Captain James Wynne was given the responsibility of forming the Regiment and as was the custom at the time they were known as Wynne’s Enniskillen Dragoons. The Regiment was raised to support the Protestant King William III against the supporters of the recently ousted the Catholic King James II; this campaign included the Battle of the Boyne in which the Regiment fought with distinction.

The Regiment left Ireland in 1694 to join the allied armies, fighting in the Flanders campaign until 1697. During this campaign Wynne died and Charles Ross assumed command of the Regiment and took it back to Connaught in Ireland. 1702 saw the Regiment return to the Low Countries to join Marlborough’s Army, again engaged against the French. The Regiment fought in all four of the major battles of the campaign: Blenheim, Ramillies, Oudenarde and Malplaquet. At Blenheim they captured three French cavalry kettledrums (which are now held in the Royal Armouries in the Tower of London). At Ramillies on 23rd May 1706 they, with the Scots Dragoons (Scots Greys), captured both the Regiment du Roi (Kings Regiment) and the Regiment de Picardie gaining the distinction of wearing grenadier caps and being re-titled The Royal Dragoons of Ireland. In 1713 the Regiment again returned to Ireland to conduct garrison duties.

For the next 85 years the Regiment served continually in Ireland, occupied with internal security duties ranging from the apprehension of smugglers and highwayman to the control of the impoverished Irish peasantry. When tasked with such duties the Regiment was split up and billeted in lodging houses and inns throughout the country, with the Regiment only coming together once or twice a year for Annual Review. This gave rise to great difficulties in maintaining discipline and operational effectiveness. By 1798 the Regiment was in a very poor state and this was clearly demonstrated when a rebellion broke out that year and the Regiment was found to be unable to respond to the crisis in the appropriate manner. The inefficiency demonstrated was not only restricted to that Regiment, but was endemic throughout Ireland. It was however the Royal Dragoons of Ireland, one of the oldest and most senior of regiments, which was made the scapegoat for the disaster. They were duly embarked for England, marched to Chatham and on the 10th of April 1799 disbanded.

From Light Dragoons to Lancers 1857

In 1857 it was decided that there was a requirement for the cavalry establishment of the British Army to be augmented by a further two regiments. Thus on the 9th of January 1858 two regiments were raised. The 18th Light Dragoons and the 5th Royal Irish Dragoons later restyled the 5th Royal Irish Lancers. The reconstituted Regiment received its first overseas posting to Cawnpore in India where they remained for 10 years. The Regiment also provided two squadrons for the Gordon Relief Force under General Graham. The force landed at Suakin on the Red Sea where they faced Osman Digna one of the Mahdi’s more capable followers. The Regiment was involved in actions at Hasheen and Tamai and after their success was awarded the Battle Honour Suakin 176 years after their last Battle Honour at Malplaquet.

The first major war the 5th Royal Irish fought as Lancers was the Boer War. By the time they embarked from India for Africa they had acquired a fine reputation; GOC Bengal described them as: “A first rate Regiment in first rate order; I never saw a better.” But the Boer War demonstrated that the new century required new tactics. The invention of smokeless gunpowder and rapid firing rifles meant that the role of the cavalry had to change, although the 5th Lancers did make a traditional cavalry charge at Elandslaagte on the 21st October 1899.

Subsequently the Regiment had the dubious honour of being besieged in the town of Ladysmith in General Sir George White’s garrison; the Boers besieged the garrison for four months before the it was eventually relieved. So short were the rations that one officer wrote: “Emaciated troop horse was issued to the troops in a disguised and more palatable form – as paste, sausage meat and even calves-foot jelly.”

After the Boer War, the 5th Lancers returned to Ireland where they came under the command of Brigadier Gough in the 3rd Cavalry Brigade at the Curragh. At the time of their posting Ireland was in a state of political turmoil, the government having decided to introduce Home Rule. This was not a popular policy amongst the Ulstermen in the north who began to arm and conduct drill under the auspices of the Ulster Volunteer Force. Furthermore it appeared that the Army was about to be mobilised in order to impose Home Rule on Ulster. Many army officers found themselves in an intolerable position as they themselves came from Ulster. On the 20th of March 1914 General Paget, GOC Irish Command, mistakenly informed his brigade commanders that their officers had the option of action against Ulster or resignation. In Gough’s brigade, which included 5th and 16th Lancers, initially 59 out of the 71 opted for resignation or dismissal, with only very few recanting when interviewed by the GOC. As a result Gough and the Commanding Officers of both the 5th and 16th Lancers were summoned to the War Office to explain themselves. A memorandum was given to Gough by the Secretary of State for War, informing officers of the 3rd Cavalry Brigade that the Army Council was satisfied that the incident that had arisen in regard to their resignations had been due to a misunderstanding. The incident became known as the Curragh Mutiny and led to the resignation of both the Secretary of State for War and the Chief of the Imperial General Staff. It did not however overly affect Gough’s career, as within five months he was leading his Brigade, still including the 5th, to war against Germany as part of the British Expeditionary Force (BEF).

The 5 Lancers, as part of the 3rd Cavalry Brigade, were heavily involved and played a major role in the initial mobile actions fought by the BEF. They gained the distinction of being the last cavalry regiment to withdraw from Mons during the retreat; they also had the privilege to be the first British regiment to re-enter Mons after the pursuit in November 1918. Generally the First World War is described as a war of trench deadlock primarily fought by the infantry, gunners and engineers, this assessment is correct. It must however be remembered that cavalry regiments were expected to take their place in the line from time to time and did share the privations of trench warfare suffered by the infantry. On a number of occasions 5 L particularly distinguished themselves: in the defence of Guillemont Farm, June 1917, 3 MCs, and 4 MMs were won and during the defence of Bourlon Wood in 1918 Private George Clare won a posthumous VC. While the main focus of the First World War remained with the armies fighting on the western front it was by no means the only theatre of war. In 1918 Allenby, a 5th Lancer and later a Field Marshal, reorganised British forces in the Middle East pushing his lines forward into northern Palestine. Allenby’s Army broke through at Megiddo resulting in the collapse of Turkish resistance.

With the end of the war came the inevitable reductions in the strength of the army. The effectiveness of the machine gun and artillery had rendered the mass use of cavalry redundant. As a result it was the cavalry who were to take the brunt of the cuts. By 1921 it had been decided which regiments were to be disbanded and the 5th Lancers were earmarked for removal from the Army List. In 1922 a change of policy proposed amalgamations rather than disbandments. As a result the 16th/5th Lancers were born. The 5th Lancers provided the establishment for D Squadron, and today within The Queen’s Royal Lancers D Squadron is still the 5th Lancers squadron.