‘It is not the beginning but the continuing of the same until it be thoroughly finished which yielded the true glory.’[1]
Having escaped the amalgamations of 1957,[2] on 21st January 1959, it was announced by her Majesty’s Secretary of State for War, Christopher Soames, that 9th Queen’s Royal Lancers and 12th Royal Lancers (Prince of Wales’s) would be amalgamated. It was a sad blow for both regiments and came as a complete surprise, made worse by the fact that no warning had been given to either regiment and that the news came, in the case of the 9th, from a junior officer who heard it on the radio and by the nanny of the 12th Lancers Commanding Officer’s children.
This disgraceful method of dealing with what was a very emotive subject, quickly provoked a question in the House of Commons by Sir Martin Lindsay Bart, CBE, DSO (Conservative MP for Solihull) a highly decorated ex-Highland Fusilier Officer, and Polar Explorer, who as a young officer in the Nigeria Regiment had won the Nigerian Grand National!!
He asked Mr Soames:
”Why the Officers Commanding the 9th and 12th Lancers had received the news of their Regiments’ forthcoming amalgamation from in one case, the 9th, a junior officer at regimental duty and in the other case, the 12th, from his children’s nanny, both having heard it announced on the wireless (sic)?”
The Secretary of State for War replied:
“A week before the announcement the Colonels of the Regiments were told of the proposed amalgamation but were asked not to disclose the information. A serious error was made in not informing the Commanding Officers before the announcement. I regret that this should have happened. Prompt and full apologies were made to the regiments concerned.”
Both regiments were bitter about the amalgamation and of course appalled at how it had been handled. The Adjutant of the 9th, Captain The Hon Nicholas Crossley had the resignation of six Officers on his desk by lunchtime and the Commanding Officer of the 12th (Lieutenant Colonel S M O’H Abraham MC) complained to the CIGS and always regretted that he had not written to the Queen.
Brigadier C.H.M. Peto, DSO, DL, Colonel the 9th Lancers summed it up very well in the message he sent immediately to the 9th:
“The regiment will have heard the news that it shall be amalgamated by April 1961 with 12th Lancers, with some bitterness. The regiment of the future, whatever its name shall be, will be the offspring of two wonderful parents. We must see to it that the child grows into a strong, brave and efficient creature, of which generations to come will be as proud as I am of the dear 9th Lancers at the moment.”
Both regiments exchanged signals (both regiments have a Tired Hunter and Mounted Lancers amongst their silver).
“From 12th Lancers to 9th Lancers Lancer to Lancer”
Our Hunter though tired, has never been gelded
If yours is a mare the twain can be welded.
The result of the match when you have a good look
Can’t fail to turn out as the best in the book.

“From 9th Lancers to 12th Lancers”
Our hunter is gelded no foal can we breed,
But our Lancer like yours is well mounted indeed.
So we’ll ride in half sections, knee to knee in the line
And show the whole world that there is nothing so fine. 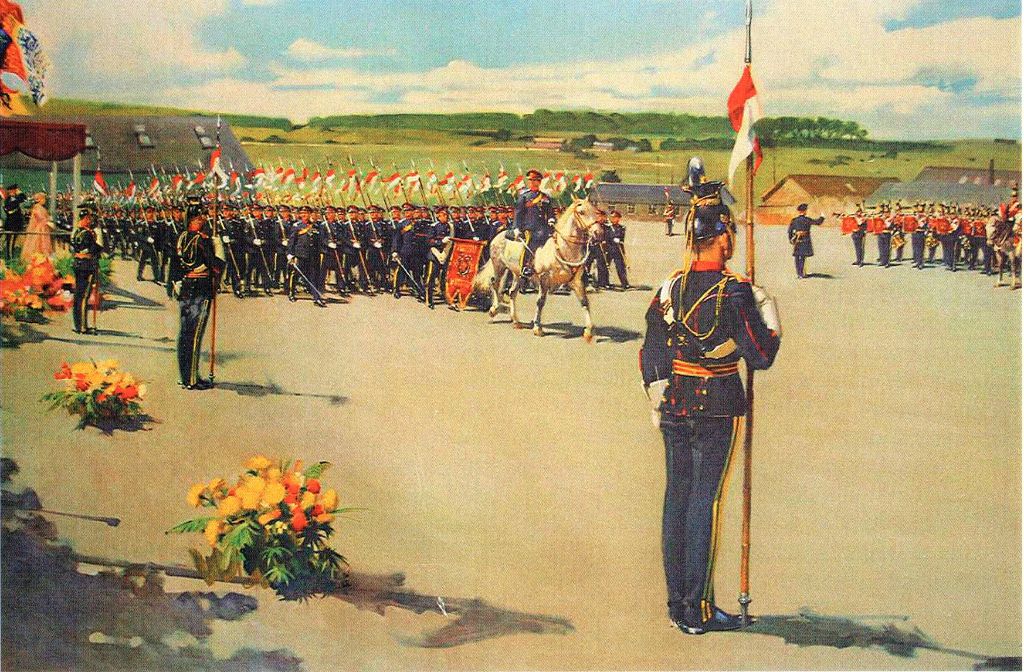 The amalgamation of the two regiments took place at Tidworth on Sunday, 11th September 1960. It was decided that a Church Parade would be the most appropriate way to mark the occasion. The two regiments marched separately to the Garrison Church on a sunny autumn morning both marching past their respective Colonels, before entering the church. Inside the church, each regiment occupied one side of the main aisle, whilst families were seated in the side aisle. The Guidons were then marched in and laid upon the altar. The moment at which the two regiments became one was when Rev P Malins the garrison chaplain read the biding prayer:
“We are gathered together in the presence of Almighty God, as members of the 9th and 12th Royal Lancers, in thankful remembrance of God’s mercies in past days, as we are united to become the 9th/12th Royal Lancers, we ask for His blessing and guidance in the days to come. We remember before God the glorious traditions of service and gallantry of both regiments, and that we pray with God’s help that we may be worthy of those who have gone before us, and in unity together rededicate our lives to the service of God and his kingdom.”[4] 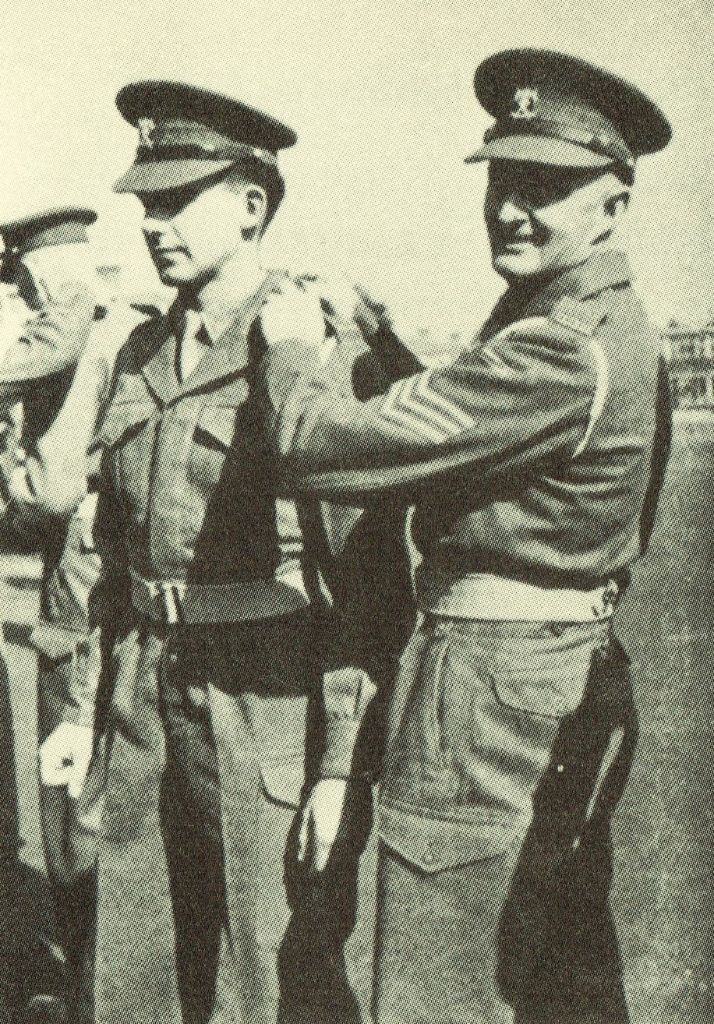 After the service, which was conducted by the garrison chaplain, assisted by the Rev Christopher Perowne (Chaplain to the 9th Lancers 1939-41) the two Guidons were marched out together and the new regiment formed up by squadrons on the Lucknow Square, near the church. Cap badges and shoulder titles were changed here and the 9th/12th Royal Lancers then marched past the Colonel of the Regiment, General Sir Richard McCreery, and dismissed on the Bhurtpore, Barrack Square.[5]
After the parade, spectators were given lunch in the Officers’ and Sergeants’ Messes. A large number of telegrams were received during the day, including one from our late Colonel-in-Chief, Queen Elizabeth, The Queen Mother, which read as follows:
Buckingham Palace, 8 am, 11th September
On the formation of the 9th/12th Royal Lancers (Prince of Wales’s) I send to all ranks my warmest greetings. I am confident that the reputation for loyalty and courage which the 9th and 12th Lancers have earned in their past history will be inherited and fully sustained in the future and I trust that the new regiment will not only uphold but will enhance the noble traditions which are your heritage.
I am indeed proud to be your Colonel-in-Chief and I can assure you that the interest of my Regiment will always be close to my heart.
Elizabeth R Colonel-in-Chief 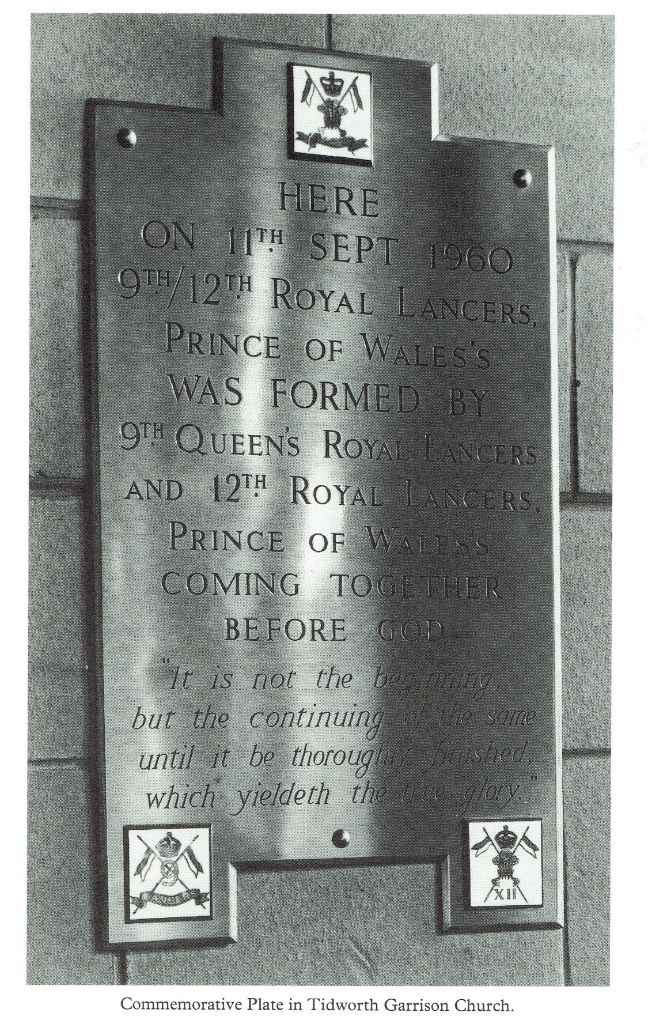