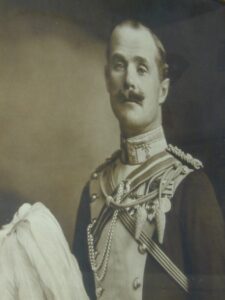 Paul Kenna was born on 2nd February 1862 at Everton, Liverpool, and educated at Oakfield house, Lancaster.
He joined the Royal Military College, Sandhurst 1884, and was then promoted 2nd Lieutenant in the 2nd Battalion West India Regiment 1886.
He transferred to the 21st Hussars 12.5.1889 and was Posted to ‘G’ Troop in Bangalore.
He was awarded a Certificate from Veterinary School, Poona 31.10.1890, and a Certificate as an Instructor of Army Signalling in Bangalore, also in 1890.
He served in India until 1894 when he returned to the UK and was awarded a Certificate from Bellary School of Musketry.
He re-joined Regiment in India from UK 3.7.1895.
Kenna was a Captain in 1898 when during the Battle of Khartoum in the Sudan he won the Victoria Cross during the 21st Lancers’ Charge at Omdurman 2.9.1898.
His Citation reads “He assisted Major Crole-Wyndham by taking him on his horse behind the saddle, Major Wyndham’s horse having been killed, thus enabling him to reach a place of safety. He subsequently returned to assist Lieutenant de Montmorency who was endeavouring to recover the body of Lieutenant Grenfell”.
London Gazetted on 15th November 1898.

He later served in the Second Boer War in South Africa 1899–1900 and was promoted a Brevet Major on 29.11.1900. For his service during the war, he was appointed a Companion of the Distinguished Service Order (DSO) in the South Africa Honours list published on 26 June 1902.He received the substantive rank of major on 7.9.1902, on his appointment to lead a Mounted infantry flying column in Somaliland. In September 1910 he retired with the rank of Colonel from the Regular Army but in April 1912 was appointed to command the Notts and Derby (Yeomanry) Mounted Brigade and on the outbreak of war was appointed Brigadier-General.
He competed in the 1912 Summer Olympics for Great Britain as a horse rider. He did not finish the Individual eventing (Military) competition, also the British team did not finish the team event. In the individual jumping event he finished 27th.