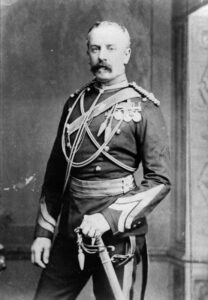 Lieutenant-Colonel Lord William Leslie de la Poer Beresford VC KCIE (20th July 1847 – 30th December 1900), was the third son of the Church of Ireland minister John Beresford, 4th Marquess of Waterford and his wife, the former Christiana Leslie. Beresford was sent to Eton College in 1858. When he was 16, he left Eton for Bonn, where he studied French and German at the home of a tutor.
n 1867, at the age of 20, he joined the 9th Queen’s Royal Lancers as a cornet. In 1875, the Regiment was sent to India, where it was stationed at Sialkot. Later that year he was appointed aide-de-camp to Lord Northbrook, the retiring Viceroy, in Calcutta.
He had achieved the rank of Captain, and in 1879 was with his Regiment in South Africa, during the 1st Boer War.
On 3rd July 1879 at Ulundi, Zululand, South Africa, during the retirement of a reconnoitring party, Captain Lord William Beresford went to the assistance of Sergeant Fitzmaurice of the 24th Regiment, whose horse had fallen and rolled on him. The Zulus were coming in great numbers, but Lord William, with help from Sergeant Edmund O’Toole of the Frontier Light Horse, managed to mount the injured man behind him. He was, however, so dizzy that Sergeant O’Toole, who had been keeping back the advancing Zulus, gave up his carbine and, riding alongside, helped to hold him on until they reached safety.
Initially the VC was only awarded to Beresford but he told the Queen that O’Toole also deserved the honour: ‘Her Majesty pinning it on to the hero’s breast, but not before he had explained to his Queen he could not in honour receive recognition of any services he had been able to perform, unless Sergeant O’Toole’s services were also recognised, as he deserved infinitely greater credit than any that might attach to himself. The Queen, appreciating this generosity and soldierly honesty, bestowed the reward also on Sergeant Edmund O’Toole of Baker’s Horse, and Lord William was satisfied.’
(Quote Source: Mrs Stuart Menzies – Lord William Beresford VC: Some Memories of a famous sportsman, soldier and wit. 1917)