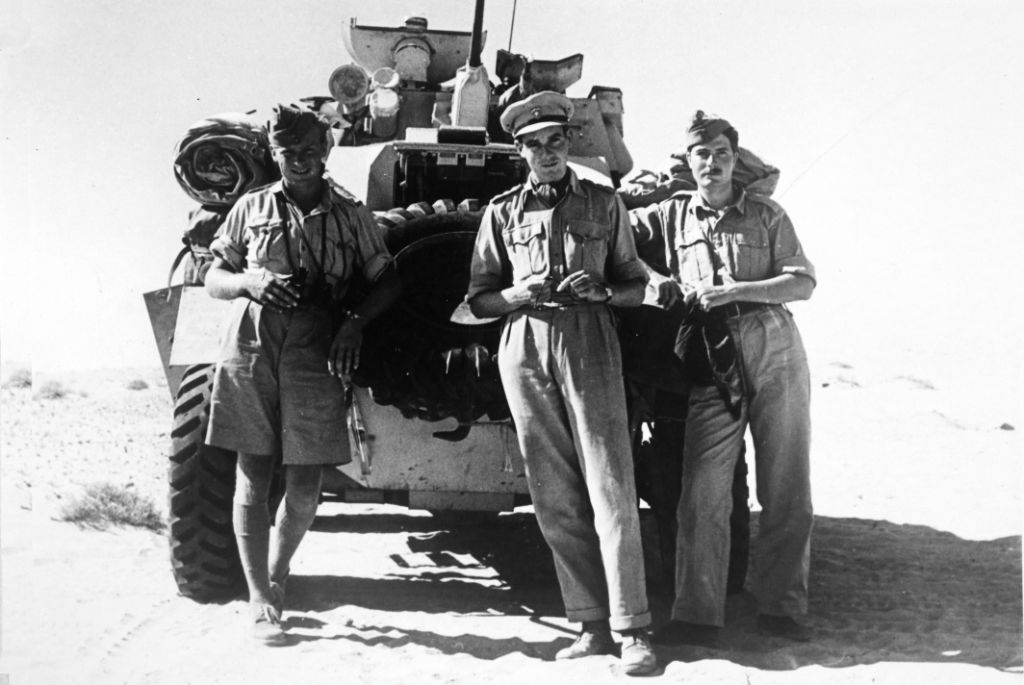 Preparations for the next offensive now pre-occupied the 9th Lancers and 12th Lancers which were now both back in the 1st Armoured Division which, along with 10th Armoured Division, formed Lieutenant-General Lumsden’s X Corps.  Training focussed on one event – a passage through a minefield breach at night – as part of Montgomery’s plan to inflict a crushing defeat in a set-piece battle that would give Rommel no freedom to manoeuvre.  In the north of the Alamein line XXX Corps’ infantry and engineers would break through the ‘Devil’s Garden’ of minefields to create lanes through which X Corps’ two divisions of armour would pass to cut off the German supply lines destroy the panzer reserves.  To the south, XIII Corps would attack to fix enemy forces there and prevent them reinforcing the north, while also pushing lighter armoured forces through to El Daba.

Movement to the start line commenced at 7.30p.m. as the 9th Lancers passed along ‘Moon Track’ and through the Allied minefields and the first enemy minefield belt by 2a.m. before waiting for an hour as the second enemy minefield was breached, with A Squadron’s Cruisers assisting the Minefield Task Force.  By dawn the minefield belts remained unbroken and the Regimental Group, with much of 2nd Armoured Brigade, found itself exposed, hemmed in by minefields and unable to manoeuvre as heavy shelling began.
Vehicles started to burn as enemy guns on Meteiriya Ridge, 3000 yards to the front, successfully engaged them, a situation endured until midday when the minefield was breached and the advance continued until, within a few hundred yards of the Ridge, yet another minefield was found with no apparent way around ‘The Brigadier ordered us to drive straight through whatever the casualties, so, after a quick check back to make certain that he really meant it, C Squadron drove into the mines.’[2]  To add to the danger, German tanks were spotted, while 88mm guns and small arms began to engage until the two leading troops got through (a troop leader had dismounted to guide and clear mines) and, having engaged the enemy armour, seized and held a section of the Ridge until the remainder of the squadron, supported by B and RHQ could secure it.  At dusk the enemy withdrew leaving twelve tanks destroyed for the loss of four of the Regiment’s Shermans.  That night, the 9th Lancers leaguered in the same spot, with bullets still flying about, as they prepared for the next part of the mission with success seemingly within their grasp.

It proved a false hope as attempts to advance over the following days were baulked by further defences and counter-attacks that took a significant toll across the Brigade, with neither armour nor infantry able to make significant progress.  The situation was the same across the front although the assault had tied up the enemy’s tactical reserve, taken a large bite out of his position and used up much of his fuel, though at a high cost to the Allied infantry which was by now exhausted.  A pause was now needed to withdraw the armour, reset and then attempt to push through again as on the first night, the 9th Lancer’s history summing up the plan (Operation Supercharge) briefly  – ‘In other words to back down the hill again and take another rush at it.’[3]  In preparation, after four days spent in close contact, the 9th were taken out of the firing line to refit during the last three days of October.

The 12th Lancers’ part in the opening stages of El Alamein had been less dramatic, but equally frustrating.  Having moved up behind the artillery barrage along Sun, Moon and Star tracks to support 1st Armoured Division, dawn found the Regiment just to the north of the entrances to the two main minefield gaps where they remained, prevented from reaching 2nd Armoured Brigade on Meteiriya Ridge by the weight of fire from artillery and anti-tank guns.  The situation persisted until the 27th October, when the first patrols from each squadron reached the formation ahead of them, before being withdrawn with the rest of the 1st Armoured Division to recuperate the following day, the War Diary recording:  ‘Our patrols are not very useful.  This is definitely no place for an armoured car regiment.’[4]

Operation Supercharge on 2nd November was to use similar tactics but this time with X Corps prepared to fight to achieve a breakthrough if XXX Corps failed to open a sufficient breach.  9th Armoured Brigade were ordered to punch through the anti-tank screen – prepared to take 100% casualties if necessary – with 2nd Armoured Brigade ready to pass through and bring 21st Panzer Division to battle.  The 12th Lancers were to continue to act as the Divisional reconnaissance regiment with orders, so Captain Bishop, by now the Adjutant, recalled to ‘”keep going, not stopping for 88s or 105s or anything like that”, which sounded slightly ridiculous, not to say suicidal.’[5]
By dawn the infantry were on their objective and the 9th Armoured Brigade, at an appalling cost (the 3rd Hussars lost all but four of its fifty-two tanks), had succeeded in punching some of the way through the German anti-tank shield as far as the Rahman track in order to allow the 1st Armoured Division to begin the break-out.  With the 12th Lancers fanning out in front of the Division, a troop-leader described the situation as they moved forward: ‘As dawn broke one’s sensations were very unpleasant.  In the haze of dust shapes arose.  All of them were hostile in silhouette and only time told which of them were alive, which dead and innocuous.  The agony of suspense felt by a troop leader approaching a cluster of enemy tanks or an anti-tank line of up to twenty guns before he could be certain, by the mere fact of his continued existence, of their abandonment can best be imagined…advancing over ground which had been fought for and captured only a few hours before, was the indescribable smell of battle, of death, of explosive and burnt material.  It was most unnerving.’[6]

In the same area, the 9th Lancers had led the 2nd Armoured Brigade advance on to the plateau of Aqqaqir where they too came across the wreckage of the 9th Armoured Brigade as both regiments now found themselves engaged by the enemy’s still potent anti-tank guns and armour.  For the 9th the fight that ensued was ‘about the worst we had ever had.’[7] Facing a line of 88s, 105s and armour which engaged them from three sides, over six concerted counter-attacks were repulsed, with the 9th Lancers accounting for thirty-one tanks in a fight that was by no means one-sided ‘The terrific cross-fire was taking its toll.  Two of C Squadron’s Shermans were burnt out, one cruiser destroyed and five other Shermans knocked out.  Our own infantry, dug-in on the battlefield, suffered terribly, being killed by shells meant for us.  In that torrent of shot and shell any man who moved was killed.  We did what we could for them, but our attention was taken up in fighting for dear life.’[8]  Although the breakthrough had not occurred, the day’s fighting, ‘the hammering of the panzers’ had succeeded in bringing Rommel’s armour to battle and reducing it significantly, causing losses the Germans could ill afford.  The following day continued with much the same slugging match though signs were coming, as the German infantry began to lose their nerve, that the battle was beginning to turn and by the afternoon the 12th Lancers, who were in an observation line north-east of Aqqaqir and engaging enemy transport with direct fire, were able to report on an enemy that was finally abandoning its positions and heading west.

On the 4th November the breakout by the 1st Armoured Division was led by the 12th Lancers as news began to arrive of large numbers of prisoners being taken to the south.  In the brief lull men who were exhausted after the action of the last few days and without the sound of shells to wake them, slept where they stopped, the 9th Lancers’ history recording that on the following morning ‘the first thing we saw..was a cold and untidy German private standing over the Colonel as he slept and saying.. ‘I’ve been trying to find someone to surrender to for three hours.’  To which a sleepy voice replied: ‘Shut up and sit down.’[9]  Despite these distractions the attempt to destroy the Afrika Korps continued, with 1st Armoured Division initially ordered to roll up the enemy positions to the north before new instructions arrived to break contact and move south-west before hooking up towards Mersa Matruh to intercept and destroy the enemy as they withdrew.  By chance the Afrika Korps had also taken this route and the 12th was soon back in contact with the enemy, Major Shand unwittingly trying to destroy General Rommel’s headquarters which, unsurprisingly, was heavily defended and led to his capture.  By the 7th November, both regiments were in position on an escarpment overlooking the road forty-five kilometres west of Mersa Matruh, with the enemy three miles in the distance and their complete destruction seemingly certain – if only they could be got at.

Getting at them proved impossible.  Torrential rain had started to fall, turning the ground to a quagmire that bogged the 12th Lancers’ wheeled vehicles and prevented the fuel lorries reaching the tanks, leaving the 9th Lancers static for twenty hours.  Unable to do anything but watch the Germans get away on the tarmac road to their front both Regiments felt the same degree of frustration ‘Below us, on the plain, there stretched many miles of German transport, guns and tanks…The [2nd Armoured] Brigade sat and fumed, watching them until it became too dark to see…the lorries arrived and tanks were filled…An hour before dawn we formed up in battle order and raced over the top and down the escarpment – but the bird had flown.’[10]  Once again there was to be no complete destruction of the enemy, which would now begin a skilfully handled withdrawal to the west.

Despite this frustration the battle of Alamein had produced the first major Allied victory of the war, reduced the Axis’ armour by 450 tanks and cost them 30,000 prisoners, of which the 12th Lancers accounted for nearly 1000 in the four days to the 8th November.  This was also the day that the coast road was finally reached, a squadron of the 12th Lancers letting slip a fleeing German lorry full of high-class food and other luxuries that the 9th, further along the road, managed to intercept before a small portion and a note of thanks was sent back.