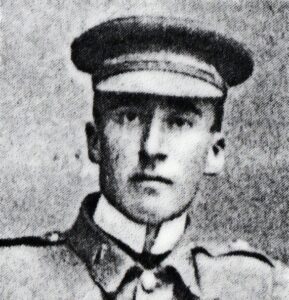 Born on 21st October 1877 at Burnley Lancashire, and educated at Marlborough and Christchurch College Oxford, Frederick Dugdale was the third son of Colonel James Dugdale, of both Ivy Bank, Lancashire and Sezincot, Gloucestershire.
He was appointed 2nd Lieutenant in the 5th Lancers 18.10.1899, and left to join his Regiment in South Africa, which was already involved in the defence of Ladysmith. He served under General Sir Redvers Buller in the relieving force.
Promoted Lieutenant 12.3.1900.
He was present at the Relief of Ladysmith and Belfast. He also served under Sir John French in Cape Colony.
He was the recipient of a Victoria Cross for this campaign, and the first officer of 5th Lancers to be awarded this distinction whilst serving with them.
His citation reads: On 3rd March 1901 near Derby, South Africa, Lieutenant Dugdale was in command of a small outpost when, having been ordered to retire, his patrol came under heavy fire at a range of about 250 yards, and a sergeant, two men and a horse were hit. Lieutenant Dugdale dismounted and put one of the wounded men on his own horse. He then caught another horse, galloped up to another wounded man and took him up behind him, then brought both men safely out of action.
London Gazette 17.9.1901.

The Victoria Cross was presented to this young and promising officer by HM King Edward VII on 24.10.1902
As well as the Victoria Cross, he held the Queen’s and King’s medals with clasps, also clasps for Tugela Heights, the Orange Free State, Relief of Ladysmith, Laing’s Nek and Belfast, Cape Colony.
He was riding with the North Cotswold Hunt on the 13th November 1902 when, whilst taking a fence, his horse fell and landed on top of him. His body was so severely crushed that he died on within two hours, never having gained consciousness.
His medals are on display at the QRLNY Museum Thoresby.
His memorial and grave are in Longborough, Gloucestershire.