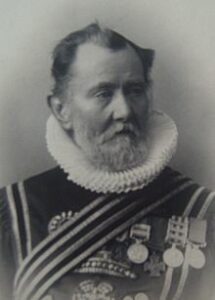 Robert Kells was born in Meerut, India on 7th April 1832, the son of a serving soldier.
He was just 12 years and 9 months old when he attested as a boy soldier with the 9th Lancers. He went on to serve with the Regiment in the 2nd Sikh War at the battles of Chillianwallah and Goojerat. By 1857, during the Indian Mutiny, he had been promoted to Lance Corporal.
On the 28th September 1857, the 9th Lancers found themselves involved in the action at Bulandshahr, and Kells would become one of several VCs awarded to the 9th Lancers during the battle. Kells was acting as orderly to Captain Drysdale who was leading the charge on that occasion, when Drysdale’s horse was shot from under him. Falling heavily, Drysdale’s collar bone was fractured, and he lay helpless in the open. Lance Corporal Kells and Private Jordan stopped their own horses and went to Drysdale’s assistance as the mutineers closed in on him. Kells and Jordan managed to keep the enemy sepoys at bay until further assistance arrived. Jordan was severely wounded by a musket ball, and sadly succumbed to his injuries.
Kells’ Citation: For conspicuous bravery at Bolundshahur, on the 28th of September, 1857, in defending against a number of the enemy his commanding officer, Captain Drysdale, who was lying in a street with his collar-bone broken, his horse having been disabled by a shot, and remaining with him until out of danger. Despatch from Major-General Sir James Hope Grant, K.C.B., dated 8th April 1858.
He later joined the 1st Bengal European Light Cavalry (renamed the 19th Hussars in 1862) and achieved the rank of sergeant. He retired in 1868 and was appointed a Yeoman of the Queen’s (Queen Victoria) Bodyguard on 1 January 1881. In June 1901 he received the Royal Victorian Medal from King Edward VII during an inspection of the Yeomen.
Kells died on 14 April 1905 and he is buried in Lambeth cemetery in South London.
His medals are held by the 9th/12th Lancers Museum in Derby.