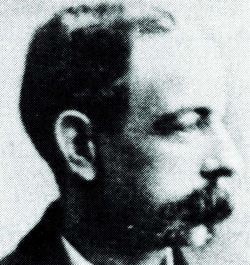 Alfred Stowell Jones was born at 3, Huskisson Street, Liverpool on 24th January 1832, the son of Archdeacon John Jones and his wife, Hannah, daughter of John Pares, of Hopwell Hall, Derbyshire. He was educated at Liverpool College and at Sandhurst, and entered the 9th Lancers on 9th July 1852, as a Cornet, by purchase. He became a Lieutenant on 21st September 1855.
In 1857, during the Indian Mutiny he held the rank of Lieutenant, and on the 8th of June, at Budli-ka-Serai, leading the right troop of the 4th Squadron, 9th Lancers, was awarded the Victoria Cross during the Siege of Delhi.
His citation read: “The Cavalry charged the rebels and rode through them. Lieutenant Jones, of the 9th Lancers, with his squadron, captured one of their guns, killing the drivers, and, with Lieutenant-Colonel Yule’s assistance, turned it upon a village, occupied by the rebels, who were quickly dislodged. This was a well-conceived act, gallantly executed.”
Despatch from Major-General James Hope Grant, K.C.B., dated 10th January 1858.
He then served throughout the siege and was Deputy Assistant Quartermaster General of the Cavalry, was awarded the Mutiny Medal with two clasps and was mentioned in despatches three times and promoted Captain and Brevet-Major. After graduating from Staff College in 1861 he served on the Staff at the Cape 1861-7. He retired in 1872 with the rank of lieutenant colonel.
After retiring from the army he became an environmental engineer and won a prize from the Royal Agricultural Society for best managed sewage farm.
He lived at Ridge Cottage, Finchampstead, Berkshire, and died there, aged 88, on 29th May 1920.
He is buried in the churchyard of St James in the village.