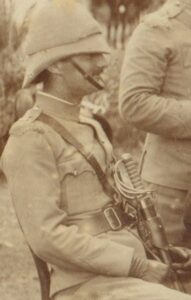 Raymond de Montmorency was born on 5th February 1867 at Montreal, Canada.
He was commissioned as a 2nd Lieutenant to D Squadron the 21st Hussars in1887.
On 22.11.1887 the Regiment was posted from Colchester via Portsmouth 22.11.1887 to Bombay then Bangalore. On 6.10.1889, whilst in Bangalore, he was promoted to Lieutenant.
In 1897 The Regiment it was re-designated as a Lancer regiment, becoming the 21st (Empress of India’s) Lancers
De Montmorency was 31 years old, and a lieutenant in the 21st Lancers during the Sudan Campaign when the following deed took place for which he was awarded the VC:
On 2.9.1898 at the Battle of Omdurman, Sudan, after the charge, Lieutenant de Montmorency returned to help an officer who was lying surrounded by a great many Dervishes. He drove the Dervishes off and finding that the officer was dead, put the body on his horse which then broke away. Captain Paul Aloysius Kenna and a corporal then came to his assistance and he was able to re-join his regiment. His citation read:
‘At the Battle of Khartum on the 2nd September 1898, Lieutenant de Montmorency, after the charge of the 21st Lancers, returned to assist Second Lieutenant R. G. Grenfell, who was lying surrounded by a large body of Dervishes. Lieutenant de Montmorency drove the Dervishes off, and, finding Lieutenant Grenfell dead, put the body on his horse which then broke away. Captain Kenna and Corporal Swarbrick then came to his assistance, and enabled him to re-join, the Regiment, which had begun to open a heavy fire on the enemy.’ London Gazetted on 15th November 1898. De Montmorency was also awarded Queen’s Sudan Medal (27.3.1899) & Khedive’s Sudan Medal with ‘Khartoum’ clasp (19.1.1899).
Later that year, in South Africa, Lieutenant de Montmorency raised a Corps of Scouts during the Boer War, and was killed in action as a Captain when commanding them at Dordrecht, Cape Colony on 23rd February 1900.