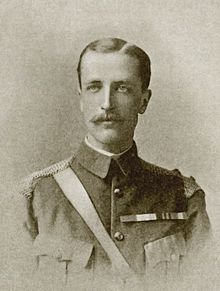 Alexander Fincastle was born on 22nd April 1871 at Portland Place, London, immediately taking the courtesy title of Viscount Fincastle.
On 30 May 1892, Murray was commissioned into the 16th Lancers and sent to India. He served as   aide-de-camp to Victor Bruce, 9th Earl of Elgin, Governor-General of India from 1895 to 1897. He was promoted to Captain 2.12.1895. In 1896, he accompanied the Dongola Expedition to the Sudan and saw action in the Mahdist War.
On 17.8.1897 at Nawa Kili, Upper Swat, India (Tirah Campaign), Lieutenant Fincastle with two other officers, R.B. Adams & H.L.S. Maclean, and 5 men of the Guides, went under a heavy and close fire, to the rescue of a Lieutenant of the Lancashire Fusiliers, who was lying disabled by a bullet wound and surrounded by enemy swordsmen. While the wounded officer was being brought under cover, he was killed by a bullet. One of the officers of the rescue party was mortally wounded and 4 horses were shot.
His Victoria Cross was gazetted on 9.11.1897
In 1899 he was posted to South Africa as aide-de-camp to General Sir H. C. Chermside  He fought in the Second Boer War and was present at the Relief of Kimberley. In late 1901 he raised Fincastle’s Horse (31st Battalion Imperial Yeomanry), and was appointed in command of the battalion with the temporary rank of Lieutenant-colonel on 22 January 1902.[
In 1906, Fincastle was awarded the Royal Victorian Order for services to the Prince of Wales, in connection with the marriage of King Alfonso of Spain. When in February 1907 Murray’s father died, he succeeded to the family titles, becoming the Eighth Earl of Dumore.and resigned his commission to look after the family’s considerable estates.
He returned to active duty in 1914 with the outbreak of World War I, serving as a staff officer on the Western Front. He was awarded the Distinguished Service Order during the Battle of the Somme, was Mentioned in Despatches four times and wounded twice.
The Earl of Dunmore died in London on 29.1.1962 aged 90.