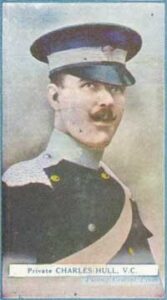 Charles Hull was born on 24th July 1890 at Harrogate, Yorkshire.
He joined the 21st Lancers in 1908 at the age of 18 and was posted with the Regiment to India in 1912. The Regiment remained in India during the Great War and saw action on the N.W. Frontier. Mullahs in the region had taken advantage of Britain’s focus on the war in Europe to stir up anti-Empire sentiment. In April 1915 approximately 2400 Mohmand tribesmen attacked the 1st (Peshawar) Division in the Peshawar district, due north of Peshawar across the Kabul river.
The April 1915 attack was defeated but unrest continued and considerable fighting and skirmishing against the Mohmands and other tribes continued between 17th August and 28th October. The Regiment was ordered to form a “flying column “to stand by for an emergency. In the last few days of August this emergency arose and the “flying column ” was ordered to turn out in order to deal with the tribesmen who were causing trouble.
On Sunday, 5th September 1915, at Hafiz Kor near Shabkadar (later spelt Shabqadar), which protected vital water supplies in Peshawar, the Regiment was ordered to charge. During this charge Corporal (then Shoeing Smith) Hull saw the Adjutant, Captain Learoyd, have his horse killed under him and become trapped under it. Shoeing Smith Hull immediately went to his rescue and amid fierce fire from the enemy he succeeded in freeing the Adjutant and brought him back to safety riding “pillion.”
For this action Hull was awarded the Victoria Cross. His citation reads “When under close fire of the enemy, who were within a few yards, he rescued Captain Learoyd, whose horse had been shot, by taking him up behind him and galloping to safety. Shoeing Smith Hull acted entirely on his own initiative and saved the officer’s life at the risk of his own.” The award was gazetted on 3.3.1916
Later in the war, Shoeing Smith Hull was in the Squadron of the 21st Lancers which went to France. Here Hull escaped from the Germans after having been captured and on his way back managed to rescue two French Generals as well. This earned him the Croix de Guerre. Hull, however, used to tell those who asked him, that he got it for being “first into the canteen and last out.” This was recorded in the London Gazette on 3rd March 1916.
After the War he was one of the honour guard at the interment of the Unknown Soldier at Westminster Abbey on 11 November 1920.
Charles Hull then served in the Leeds City Police Force for many years after his military service.
He died on 13th February 1953 at Leeds, Yorkshire.
A keen sportsman who played cricket and football for the Regiment and for the Leeds Police, he was respected and loved by all who knew him. Hull was buried with full Military Honours at Woodhouse Lane Cemetery Leeds, and a detachment of the Regiment from the Yeomanry headquarters at Newark acted as the bearer party. There is a plaque commemorating him in Jubilee Gardens, Harrogate.
Mr. Hull let it be known that after his death he wanted his medals, Victoria Cross, 1914/15 Star, British War Medal, Victory Medal, Defence Medal, Coronation Medal 1937 and Croix de Guerre with oak leaf, to be given to the 21st Lancers, the Regiment he loved and served so well. These medals were presented at the Old Comrades’ Reunion Dinner by Mr. F. W. Clarkson (late 21st Lancers), who rode beside Hull on this famous charge.
Hull was buried with full military honours at Woodhouse Lane Cemetery Leeds.
A detachment of the Regiment from the Yeomanry headquarters at Newark acted as bearer party.