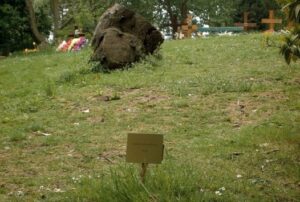 James Reynolds Roberts (1826-1859) was born in 1826 in Bow, London. He enlisted with the 9th Lancers and had enlisted before the outbreak of the Mutiny in 1857. On 28th September 1857, he became heavily involved in the Battle of Bulandshahr.
During the Battle, he was part of the group that followed Captain Augustus Anson VC through the streets. Despite being wounded in his bridle hand, Roberts rose to the rescue of Farrier Stillman, who had been shot off his horse. Immediately the two soldiers were surrounded by sepoys, but Roberts managed to hold them off until help arrived. Unfortunately, Stillman died of his injuries but his rescuer was recommended for the Victoria Cross, which was gazetted on Christmas Eve, 1858.
Sadly, Roberts was not to live long enough to receive his VC in person. After returning to England following the Mutiny, he fell ill and died in Middlesex Hospital, Marylebone, London on 1st August 1859. His VC was posted to his next of kin, his brother on 21st September 1859. He was buried in an unmarked grave in Paddington Old Cemetery. His medals are now held in the 9th/12th Lancers Regimental Museum in Derby Museum and Art Gallery.