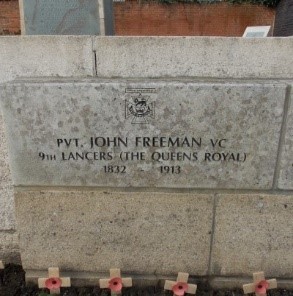 John Freeman was born in 1833 in the village of Barming, near Maidstone, Kent. Initially working as a farm labourer, when he was 24, he enlisted with the 9th Lancers, and went on to serve with them in India. Little else is known about him, and no images of him are known to exist.
He would have been involved in many of the engagements of the Indian Mutiny, and on 10th October 1857 was awarded a Victoria Cross during an action at Agra.
His citation states: “For conspicuous gallantry on the 10th of October, 1857, at Agra, in having gone to the assistance of Lieutenant Jones, who had been shot, killing the leader of the enemy’s cavalry, and defending Lieutenant Jones against several of the enemy.” Despatch by Major-General Sir James Hope Grant, KCB, dated 8 April 1858.
The London Gazette dated 3 August 1858 reported: The Nominal Return of Casualties, in action, in Her Majesty’s Troops at Bareilly, on 5, 6 and 7 May 1858 indicates that Freeman was “dangerously wounded”.
His injuries caused him to be invalided from the Army and moving back to England he then lived at 17 Holcroft Road in South Hackney, London, passing away at the age of 80 on 1st July 1913. He was buried in Abney Park Cemetery in Stoke Newington.
in His VC is on display in the Lord Ashcroft Gallery at the Imperial War Museum, London.