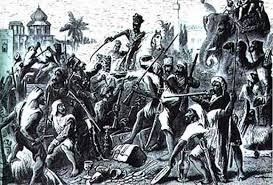 Patrick Donohoe, (born 1820, Nenagh, Ireland, died 18/08/1876, Ashbourne, Ireland) was approximately 37 years old and a private in the 9th Lancers, during the Indian Mutiny when the following deed took place on 28 September 1857, at Bolandshahr, India, for which he was awarded the VC:
On 28th September 1857, during the 9th Lancers’ cavalry action at Bulandshahr, Captain Robert Blair was ordered to bring in an abandoned ammunition wagon. Taking a sergeant and 12 other men, he approached the wagon, when suddenly 60 rebels appeared from behind some buildings. Despite being heavily outnumbered, Blair led a charge against the enemy and killed three of them. He then received a severe sabre cut across his left shoulder, which left him disabled. At this point, Private Donohue saw Blair was in trouble and about to be hacked to death, so he moved in to defend him and lead him to safety. The small party fought their way clear, leaving nine dead, before making it back to their lines.
Donohue, alongside Blair, was recommended for the VC, and his VC was announced on the 24th December 1858. Donohue was presented with his VC by Queen Victoria at Windsor Castle on 4th January 1860. Little is known about his life following the Army except that he returned to Ireland. He died on 16th August 1876 aged 56 in Ashbourne, County Meath, Ireland. He was buried in an unmarked grave in Donaghmore RC Churchyard, near Ashbourne. Interestingly, following some research in 2006 in the United States, it was discovered that Patrick had a younger brother, Timothy, born in 1825 who had been awarded the Medal of Honor, making the Donohue’s the only VC/Medal of Honor recipients. In a further development in 2011, his medals were discovered in a private medal collection in Western Canada.