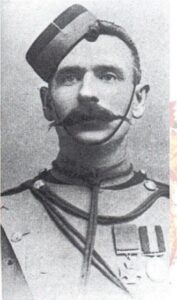 Thomas Byrne was born on in December 1866 at St Thomas, Dublin, Ireland.
He enlisted 8th Hussars at 20 years of age and was posted to ‘E’ Troop, B Squadron.
The Regiment sailed from the United Kingdom to Bangalore 30.3.1888
He received Good Conduct pay @ 1d on 23.2.1891.
He was appointed Assistant Provost 9.9.1892 and received further Good Conduct pay @ 2d on 9.11.1893.
In 1894 he was permitted to extend his period of service to 12 years.
In March 1894 he was recorded as being appointed ‘Waiter Coffee Shop’
In 1898 in Cairo he transferred to the 21st Lancers.
Byrne was awarded Victoria Cross at the Battle of Omdurman 2.9.1898.
Citation reads:
“He turned back in the middle of the charge and went to the assistance of Lieutenant the Honourable Molyneaux, who was wounded, disarmed and being attacked by several Dervishes. Private Byrne, already badly wounded, attacked these, receiving a second wound, but by his gallant conduct enabled Lieutenant Molyneux to escape.”
London Gazetted on 15th November 1898.
An eye-witness, Winston Churchill, said it was the bravest act he had ever seen performed.
In September 1899 he was posted to South Africa as servant to Capt de Montmorency.
Byrne had to be restrained from trying to recover de Montmorency’s body after the latter was shot dead on 24.2. 1900.
Byrne brought back the grey polo pony Montmorency rode at Omdurman and handed it to his father, General Viscount de Montmorency.
He became groom to the father of Field Marshal Wavell in Dublin about 1901-02.
‘He was typical of the best type of old soldier’ (F.M. Wavell).
Byrne married Bridget, daughter of John Pender, a greengrocer, and retired from the army 19.9.1910.
Employed by Colonel Crole-Wyndham at Canterbury in 1913. Byrne lived at several addresses in Canterbury, including East Street, Notley Street and finally 54 St. Gregory’s Road.
He had 8 children, Theresa, Margaret, Edward, Lillian, Thomas, Norah, Bill & Brian (run over & killed at age 4).
He rejoined the army in 1914 and served at the Cavalry Remount Depot, Canterbury & in the Garrison Police.
After the War, he was a messenger at Cavalry Pay & Records Office.
He attended a Garden Party for V.C.s at Buckingham Palace.
He was a keen gardener & winner at Canterbury Allotment Holders’ Association shows.
On retirement at 65, he had served the Crown for 46 years.
Later he was to have a leg broken by an Army despatch rider & met Mrs Roosevelt in 1942.
He was a prominent member of the British Legion.
He died 14 March 1944 at Canterbury Municipal Hospital aged 77, leaving £116, and was buried at Canterbury Cemetery.