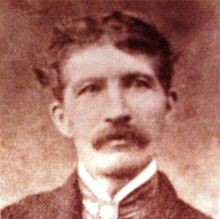 William Goate (1836-1901) was born on 12th January 1836 in the Norfolk village of Fritton. His father, a farmer, died when William was 5 years old, leaving a widow and eleven children to work the farm. On 21st November 1853, William enlisted in the 9th Lancers.
He was stationed at Umballa when the Indian Mutiny broke out in May 1857 at Meerut. The Lancers were then ordered to join the operations against the city of Delhi. Goate was present at the Siege and Capture of Delhi.
On the 6th March 1858, at Lucknow, Goate would be awarded the VC for the following action which he describes in his own words: “It was on the 6th March that I won the Cross in action at Lucknow, having dismounted in the presence of the enemy and taken up the body of Major Percy Smith, 2nd Dragoon Guards, which I attempted to bring off the field, and after being obliged to relinquish it, being surrounded by the enemy’s cavalry, going a second time, under a heavy fire, to recover the body, for which I received the Victoria Cross.” Goate then described how he was congratulated by General Sir Colin Campbell, General Sir Hope Grant and some of the cavalry officers by them shaking his hands and complimenting his actions.
He was gazetted on 24th December 1858 and received the VC on 4th January 1860 from Queen Victoria at Windsor Castle.
On 22nd November 1864, he was discharged as being medically unfit.
He then returned to his native Norfolk and lived for a while in Bungay. He married 18-year-old Sarah Ling and they had a son, William. Work in rural East Anglia was becoming increasingly difficult as British agriculture was declining in the 1870s. Goate found work first as a railway porter, then as a warehouseman. Neither of these jobs or his marriage lasted. There was little alternative but to go and find employment elsewhere. He ended up in the North East of England working in the shipyards.
For 22 years, William worked for Palmer’s, the Jarrow shipbuilder. He also served for many years with the Jarrow Company of Volunteers in the same rank he held in the cavalry. Age and illness ended his working life and, like many Victorian heroes from the ranks, he fell into deep debt. In May 1900, he left Tyneside and took up residence at 22 Leopold Street, Southsea, Hampshire to be close to his son and young family. Within a year, William contracted gastric cancer and died at his home on 26th October 1901. He was buried in a pauper’s grave in Highland Road Cemetery in Southsea. By a tragic twist of fate, his son William, died in the Royal Naval Hospital, Haslar and was buried on 29th November 1904 in the same grave as his father. Goate’s medal is held by the 9th/12th Lancers Museum, Derby Museum and Art Gallery.
His Victoria Cross is held at the 9th/12th Lancers Museum, Derby.
His Burial Place is: Highland Road Cemetery, Portsmouth, Hamphire