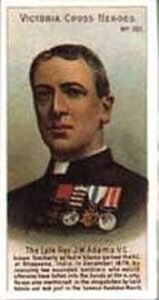 Reverend James Williams Adams was 40 years old, and a chaplain in the Bengal Ecclesiastical Department(serving as chaplain to the Kabul Field Force), British Indian Army during the Second Afghan War when on 11th December 1879 he carried out the actions for which he was awarded the VC. The citation was published in a supplement to the London Gazette of 24th August 1881) and read:
War Office, August 24, 1881.
THE Queen having been graciously pleased, by Warrant under Her Royal Sign Manual, bearing date the 6th of August, 1881, to direct that the decoration of the Victoria Cross shall be conferred on Members of the Indian Ecclesiastical Establishments who may be qualified to receive the same, in accordance with the rules and ordinances made and ordained for the government thereof, provided that it be established in any case that the person was serving under the orders of a General or other Officer in command of Troops in the Field when he performed the act of bravery for which it is proposed to confer the decoration :—
Her Majesty has accordingly been pleased to signify Her intention to confer this high distinction on the undermentioned gentleman, whose claim to the same has been submitted for Her Majesty’s approval on account of his conspicuous bravery in Afghanistan as recorded against his name, viz. :—
Bengal Ecclesiastical Establishment, late Chaplain to the Kabul Field Force, The Reverend J. W. Adams
During the action at Killa Kazi, on the 11th December, 1879, some men of the 9th Lancers having fallen, with their horses, into a wide and deep “nullah” or ditch, and the enemy being close upon them, the Reverend J. W. Adams rushed into the water (which filled the ditch), dragged the horses from off the men upon whom they were lying, and extricated them, he being at the time under a heavy fire, and up to his waist in water.
At this time the Afghans were pressing on very rapidly, the leading men getting within a few yards of Mr. Adams, who having let go his horse in order to render more effectual assistance, had eventually to escape on foot.
For the above actions Adams was recommended for the VC by Lord Roberts. Along with the Presbyterian and Roman Catholic chaplains who also accompanied the force, Adams was three times Mentioned in Despatches during the campaign. He received his medal from Queen Victoria at Buckingham Palace on 1st December 1881