The 12th (Prince of Wales’s) Regiment of (Light) Dragoons and the 16th Light Dragoons were part of the 2nd Cavalry Brigade, commanded by Major General George Anson 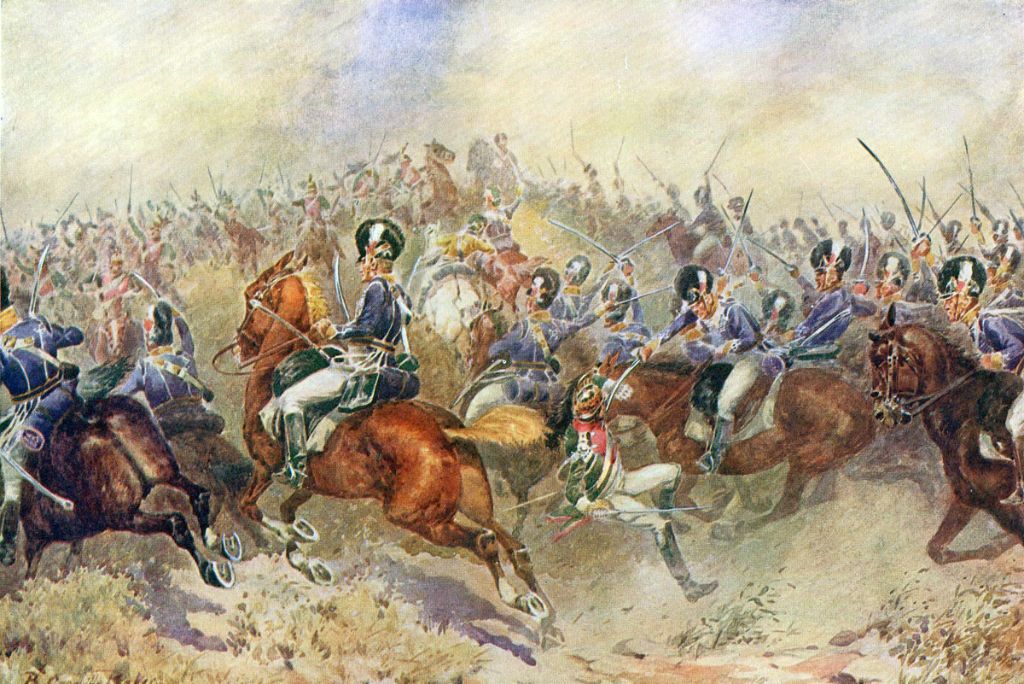 On 15th July 1812 Marmont began his offensive against Wellington’s right. Wellington was caught off guard and fell back on Salamanca. On 16th July 1812 a letter from Joseph to Marmont fell into Wellington’s hands. The letter stated that Joseph was marching to join Marmont with 13,000 men. Another French general, Cafferelli, with a force of cavalry and guns was due to join Marmont in the next few days. The two opposing armies marched on Salamanca, crossing the River Tormes on 21st July. Wellington was resolved to avoid action other than under the most advantageous of circumstances. Marmont was anxious not to engage in full battle but felt constrained to fight some sort of engagement. 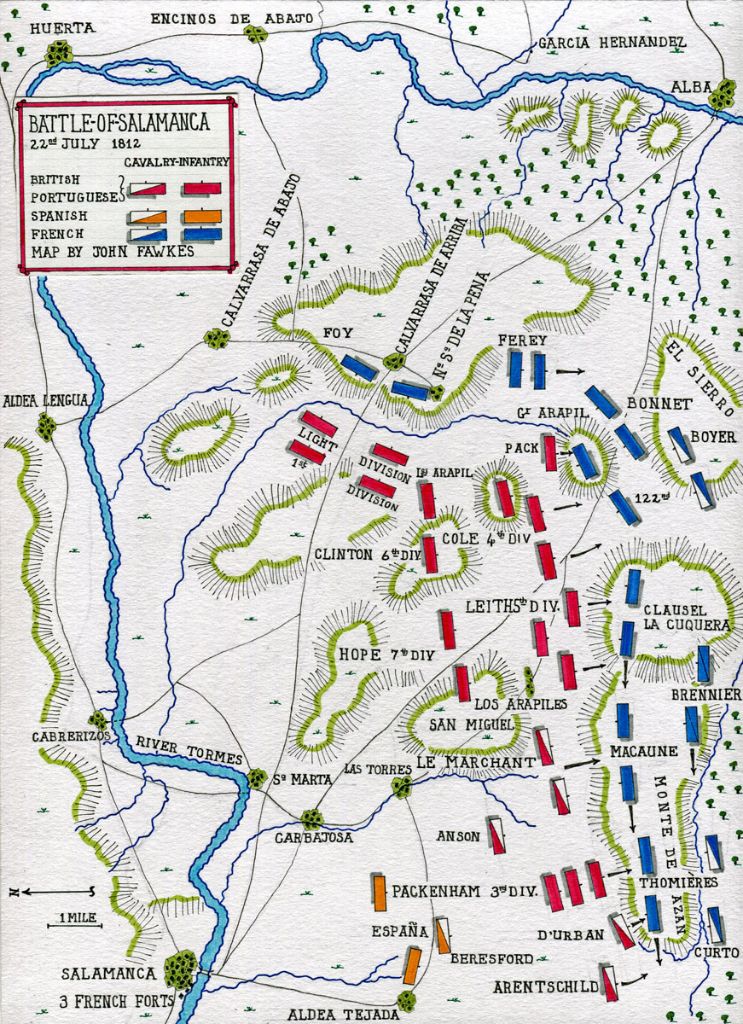 On 22nd July Marmont thought he had the right opportunity. Dust clouds beyond the hills to the South of Salamanca suggested that Wellington was retreating. British troops could be seen in the hills opposite the French positions, but Marmont assumed this was a rearguard. His ideal opportunity had arisen whereby he could engage a small force and achieve success, thereby satisfying the demands of his army and his commander, King Joseph.
Although Wellington had sent his heavy baggage on the road to Ciudad Rodrigo, not a rear guard but his whole army still lay concealed in the hills before the French. Assuming that two divisions was all he faced, Marmont resolved to engage these troops while his army marched off to the left and came in behind the British, cutting them off from the rest of Wellington’s army which he took to be retreating in the distant dust cloud.
During the day Wellington moved his hidden divisions into positions facing to the South. At about 2pm Wellington saw the nature of Marmont’s move around his flank. The French divisions were marching along the British and Portuguese front, dangerously strung out and exposing their flanks.
Wellington galloped to his extreme right, where Pakenham’s Third Division was arriving from Salamanca with D’Urban’s Portuguese Cavalry. He ordered an immediate attack on the head of the French column. Wellington then crossed the hills to his centre and directed the Fifth and Fourth Divisions to attack the French column, supported by the Sixth and Seventh Divisions and two Portuguese infantry brigades. D’Urban’s cavalry and the infantry of the Third Division began the battle, charging Thomières’ Division at the head of the French column. After heavy fighting involving Lieutenant Colonel Wallace’s First Brigade the French gave way.
Further to the left the British Fifth Division advanced down the hillside towards Maucune’s Division, isolated by the extended French column. Maucune formed his battalions in square under the threat of the advancing British cavalry and were attacked by the infantry of the Fifth Division. The British and Portuguese charged the squares and the French were driven back.
The next phase of the battle was the attack by Le Marchant’s brigade of heavy cavalry between the Third and Fifth Divisions. The cavalry struck Maucune’s retreating infantry and overran them. The charge was continued until the cavalry encountered a steady French brigade of infantry in squares and the dragoons were brought to a halt, loosing casualties including General Le Marchant who was killed.
The French divisions of Thomières and Maucune had been forced out of the battle and the division of Brennier had suffered heavy casualties. At the beginning of the fighting Marshal Marmont was wounded as was his deputy, General Bonnet. Taking command, General Clausel launched a counter attack on the open flank of the Fourth Division with considerable effect, until Beresford brought up a Portuguese Brigade from the second line of the Fifth Division and halted the French assault. The arrival of the Sixth Division, advancing in support of the Fourth Division, drove back the French.
By this time night was well advanced and the French Army of Portugal was streaming back to the Tormes River to escape the British and Portuguese assault. The battle had ended with a complete victory for Wellington.
The British, Portuguese and Spanish lost 5,000 killed and wounded (half of this number being casualties in the 6th and 4th Divisions). The French lost 7,000 killed and wounded and 7,000 as prisoners. The French also lost 20 guns.
On 12th August 1812, the British, Portuguese and Spanish army marched into Madrid. The effect of the Battle of Salamanca was to convince the British Government, finally, that the war in Spain should be continued. Wellington gained a moral ascendancy over his French opponents that he did not lose. This aggressively conducted battle dispelled Wellington’s reputation for being a cautious general, who only fought defensive actions from positions of overwhelming strength. Wellington’s victory reverberated through Europe. Napoleon was in increasing difficulty in Russia. Now his armies were being beaten in Spain.