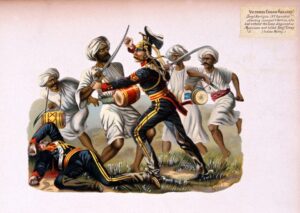 Henry Hartigan, March 1826 – 29 October 1886) was born in Drumlea, Enniskillen, County Fermanagh.
During the Indian Mutiny of 1857 he was awarded the Victoria Cross for two actions of daring and distinguished gallantry in the following instances:
At the battle of Budle-ke Serai, near Delhi, on the 8th June, 1857, in going to the assistance of Serjeant H. Helstone, who was wounded, dismounted, and surrounded by the enemy, and at the risk of his own life, carrying him to the rear.
On the 10th October 1857, at Agra, in having run unarmed to the assistance of Serjeant Crews, who was attacked by four rebels. Hartigan caught a tulwar, from one of them with his right hand, and with the other hit him on the mouth, disarmed him, and then defended himself against the other three, killing one and wounding two, when he was himself disabled from further service by severe and dangerous wounds.
Hartigan recovered from his wounds and was presented with his Victoria Cross by Lady Hersey at Fort William, Calcutta on Christmas Eve, 1860. He achieved the rank of Lieutenant and following his army service he remained in India and died on 29th October 1886, aged 60 in Calcutta. He was buried in an unmarked grave in Barrackpore New Cemetery in the city.