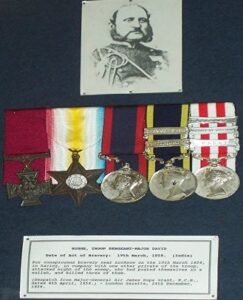 David Rushe (1827-1886) was born in Woburn, Bedfordshire on 28th April 1827. He joined the 9th Lancers at the age of 18, taking part in the First and Second Sikh Wars. Little else is known about his military career prior to his actions at Lucknow on the 19th March 1858.
On that day, Rushe, who was at this time a Troop Sergeant Major, and another private of the troop, attacked eight of the enemy, who had posted themselves in a nullah, and killed three of them. Major-General Sir James Hope Grant issued a despatch dated 8th April 1858 notifying of his action There is very little other information in his citation (published on 24th December 1858) which adds to this description.
Rushe received his medal from Queen Victoria on 4th January 1860 at Windsor Castle and was promoted to regimental sergeant-major. He died on 6th November 1886 at his home in Great Marlow, Buckinghamshire and he was laid to rest in an unmarked grave in All Saints Churchyard, Marlow.
His medals were sold by his widow after his death but were eventually recovered by his family in 1959.